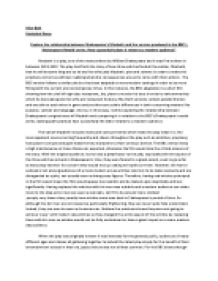 Explore the relationship between Shakespeares Macbeth and the version produced in the BBCs Shakespeare Retold series. How successfully does it relate to a modern audience?

﻿Alice Balk Analytical Essay Explore the relationship between Shakespeare?s Macbeth and the version produced in the BBC?s Shakespeare Retold? series. How successfully does it relate to a modern audience? Macbeth is a play, one of the many written by William Shakespeare and it was first written in between 1611-1612. The play itself tells the story of how three witches foretell the soldier, Macbeth, that he will become king and so he and his wife Lady Macbeth, plot and scheme in order to make this prophecy come true without realizing what dire consequences are yet to come with their actions. The BBC version follows a similar plot but has been adapted to more modern settings in order to be more fitting with the current and contemporary times. In this instance, the BBC adaptation is a short film showing how the chef of high class restaurant, Joe, plots to murder his boss in order to take ownership which he does along-side his wife and restaurant hostess, Ella. Both versions contain parallel themes and are akin to each other in genre and yet there are subtle differences in both concerning matters like purpose, context and language. ...read more.

Castles and kings are disregarded and instead the theme is centered around a restaurant, giving the film a more civilized and classier edge to the drama. This idea works well as the concept of kings and queens doesn?t work to it?s full potential on a modern audience yet the restaurant aspect holds much more potential as it brings a more modern twist to the drama yet audiences can still see how a restaurant hold a position of power and how many characters will strive to obtain the position. The vast majority of the characters set in the drama stay true to their original concept but there were a few different changes added as well. Macbeth or Joe in the drama, although much in sync with the original Macbeth but we had a much closer in-depth into his character and personality than we do in the original. This goes the same for Lady Macbeth/Ella. She is a woman who is deeply ambitious and lusts after power and position. During the beginning of the drama she appears to be the more ruthless and stronger of the couple, pushing Joe to the edge of the act of murder and this is shown through the close shot up shot of ...read more.

This is highlighted with Ella telling Joe that ?he milks you for everything you?ve got? (referring to Duncan) so milk is a strong symbol replayed regularly throughout. Another symbol used repeatedly is the use of blood. Joe at the beginning of the drama is shown hacking up a pigs head which shows he is comfortable with butchering up meat, a hint to what is yet to come with him murdering. However, after the deed is done, the pair Joe and Ella both have their hands stained with Duncan?s blood. Close up shots after indicate both of them washing their hands washing away the blood in the sink with a voice over of Ella saying ?A little water and we?re clean?. This image is repeated often, suggesting that the blood can never be cleaned, metaphorically and that their acts of murder will remain with them forever. This is taken further when we see Ella taking a shower and Joe just standing there watching her and we see the water running down her back turning into blood signifying that no matter how much water they actually cleanse themselves with, they will never be clean, which adds to the horror aspect of the drama and engages the audience more. ...read more.