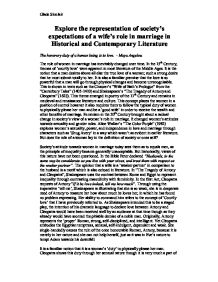 Explore the representation of society's expectations of a wife's role in marriage in Historical and Contemporary Literature The honorary duty of a human being is to love. - Maya Angelou The role of women in marriage has inevitably changed over time. In the 15th Century, themes of 'courtly love' were apparent in most literature of the Middle Ages. It is the notion that a man desires above all else the true love of a woman; such a strong desire that he must submit totally to her. It is also a familiar premise that the love is so powerful that a man will go through physical changes and become unrecognisable. This is shown in texts such as the Chaucer's "Wife of Bath's Prologue" from the "Canterbury Tales" (1405-1410) and Shakespeare's "The Tragedy of Antony and Cleopatra" (1623). This theme emerged in poetry of the 11th Century and remains in medieval and renaissance literature and culture. This concept places the women in a position of control however it also requires them to follow the typical duty of women to physically please her man and be a 'good wife' in order to receive the wealth and other benefits of marriage. Feminism in the 20th Century brought about a radical change in society's view of a woman's role in marriage. It changed women's attitudes towards sexuality and gender roles. Alice Walker's "The Color Purple" (1982) ...read more.

By referencing her "Makere", Chaucer justifies the Wife's s******y driven nature with a spiritual and religious understanding of s****l activity. Throughout the Prologue, The Wife constantly defines the purpose marriage through, s*x, money and material gain. s*x is directly linked to power for the Wife of Bath and it is the only way she can manipulate a man into sharing his wealth. Rarely is s*x associated with love in 'The Wife of Bath's Prologue' and as she has had five marriages, Chaucer sets an underlying tone that this is an unsuccessful lifestyle. Due to the way sexuality is viewed in today's society, A contemporary reader would not be surprised by the Wife's intentions as views of this nature have been caricatured in aspects of media and film-making. A reader in the Middle Ages would be feel very differently, they would be shocked by the way she is openly speaking about her s****l endeavours. Themes of s*x are evident in the majority of both historical and contemporary Literature, but the purpose of s*x and the expression of woman's sexuality have changed over time. For the majority of the book "The Color Purple" by Alice Walker, the protagonist Celie views s*x as a violent act or at best, an obligation to her husband. This is evident when "Mr.___" a character which goes unnamed for the majority of the novel, is having s****l intercourse with Celie. ...read more.

This shows the constant love and respect they have for one another as opposed to the man being infatuated with her and the feeling not being mutual. They constantly reassure each other which suggest that they are not secure with in their relationship. Cleopatra has a certain level of power in the play due to her position and ability to speak openly allows her to put her power in practice, both in her relationship and in her role as a leader. The same ability if found within The Wife of Bath, though as she is not in a relationship or of any social status. She stands up and openly speaks about her s****l relationships and previous marriages as if it were public news. The power of speech is very important in a woman's place in love and marriage. Society's convention of a submissive wife is virtually the woman who does not stand up for herself. Alice Walker, Shakespeare and Chaucer all equally show women who use assertive behaviour and emotive language through open speech to declare that there are women who have a voice in their relationships and are not afraid to speak. Women such as Shug Avery and the Wife of Bath allow women to accept their sexuality and speak freely about it, a topic which is often taboo between women and society. The ability to speak openly about personal issues positions women in a state of control, in both marriage and society. The duty of a woman in marriage is to just be a woman, as an entire being, everything else is choice. ?? ?? ?? ?? Glade Sinclair ...read more.