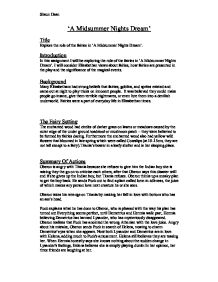 Explore the role of the fairies in 'A Midsummer Nights Dream'.

'A Midsummer Nights Dream' Title Explore the role of the fairies in 'A Midsummer Nights Dream'. Introduction In this assignment I will be exploring the role of the fairies in 'A Midsummer Nights Dream'. I will consider Elizabethan views about fairies, how fairies are presented in the play and the significance of the magical events. Background Many Elizabethans had strong beliefs that fairies, goblins, and sprites existed and came out at night to play tricks on innocent people. It was believed they could make people go insane, give them terrible nightmares, or even lure them into a devilish underworld. Fairies were a part of everyday life in Elizabethan times. The Fairy Setting The enchanted wood had circles of darker grass on lawns or meadows caused by the outer edge of the under ground toadstool or mushroom patch - they were believed to be formed by fairies dacing. Furthermore the enchanted wood also had yellow wild flowers that bloomed in late spring which were called Cowslips (at 10-15cm, they are not tall except to a fairy).Titania's bower in a leafy shelter and is her sleeping place. ...read more.

Oberon realizes that Puck has anointed the wrong Athenian with the love juice. Angry about his mistake, Oberon sends Puck in search of Helena, vowing to charm Demetrius' eyes when she appears. Now both Lysander and Demetrius are in love with Helena, adding much to Puck's amusement. Helena still believes they are teasing her. When Hermia honestly says she knows nothing about the sudden change in Lysander's feelings, Helena believes she is simply playing dumb: In her opinion, her three friends are laughing at her. Everything is put right when Oberon has Puck create a fog that will keep the lovers from finding one another and while they are a sleep, Puck reverses the spell on Lysander. He also casts a spell so none of the lovers will remember what has happened in the woods. At the end the fairies give their blessing of Theseus and Hippolyta's wedding. The Fairies - Puck My first impressions of Puck were that he was sly, mischievous and irresponsible. ...read more.

He frightens his friends away and is completely oblivious to this change. When Titania awakes, she sees Bottom as the a*s and falls in love. The magic flower has a juice that when placed on the sleeping eyelids of a man or woman, it will cause him or her to fall in love with the next live creature that he or she sees. The flower is called love-in-idleness. Puck gives the juice to the wrong people in Demetrius, Lysander and Helena and this causes all sorts of problems. When Puck creates a deep fog in which the lovers will get lost and, finally, fall asleep in exhaustion. When they awake in the morning, the night's events will seem like a dream except that Demetrius will be in love with Helena. Conclusion The role of the fairies in 'A Midsummer Nights Dream' was to create a magical world Of dreams that is both intriguing for Elizabethan and modern audiences it also shows how easily humans can be manipulated. Shaun Dean ...read more.