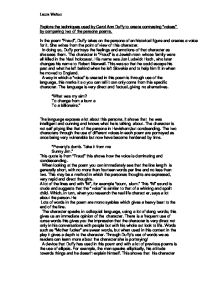 Explore the techniques used by Carol Ann Duffy to create contrasting &quot;voices&quot; by comparing two of the persona poems.

Explore the techniques used by Carol Ann Duffy to create contrasting "voices" by comparing two of the persona poems. In the poem "Fraud", Duffy takes on the persona of an historical figure and creates a voice for it. She writes from the point of view of this character. In doing so, Duffy portrays the feelings and emotions of that character as she sees them. The character in "Fraud" is a Jewish man whose family were all killed in the n**i holocaust. His name was Jon Ludwick Hoch, who later changes his name to Robert Maxwell. This was so that he could escape his past and what he left behind when he left Slovakia and to help him fit in when he moved to England. A way in which a "voice" is created in this poem is through use of the language, this marks it so you can tell it can only come from this specific character. The language is very direct and factual, giving no alternatives. "What was my aim? ...read more.

Through Duffy's use of words we as readers can learn more about the character she is portraying/ A device that Duffy has used in this poem and with a lot of previous poems is the use of ellipsis. For example, the man speaks elliptically, his attitude towards things and he doesn't explain himself. This shows that his character is "Shady ", he elliptically refers to contemporary things. When he is talking about God, he talks elliptically about a lesbian s*x show. "Then there's Him- for whom I paid for a butch and femme To make him come." To create the contrasting voice in this poem, Duffy uses the above techniques. But what techniques are used in another of her persona poems Havisham? Havisham is a character taken from literature and given a voice by Duffy. The woman in question is the tragic Miss Havisham from Charles Dickens's novel "Great Expectations." Some history to the character in Havisham is; she was jilted at the alter by her lover whom she was due to marry. ...read more.

Of course, she does not literally have ropes on her hands; its connotations are that of veins. The veins on her hands are bulging, through the stress she has been put through. This poem is full of rage and anguish, unlike Fraud where the main tone was demeaning of others. The woman in this poem is extremely self pitying and is completely self absorbed over what this man did to her. She is lonely and lost, grieving for her lost love. This poem is not normally structured; it does not flow as most poems do. In the first two stanzas there are two or three words, then a full stop. This method is to give that line a more dramatic and edgy feel, to set off the enigmas in the poem. "Spinster. I stink and remember." "Beloved sweetheart b*****d." Both of the personas in these poems are not happy or jubilant in any way, they are depressing figures that eventually come to their end. The point is that similar methods are used to create the two contrasting voices. The way in which you use them and the language used is what really determines the creation of a contrasting voice and persona. Laura Walton ...read more.