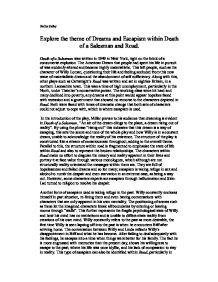 Hollie Selby Explore the theme of Dreams and Escapism within Death of a Salesman and Road. Death of a Salesman was written in 1949 in New York, right on the brink of a consumerist explosion. The American Dream that people had spent his life in pursuit of was suddenly altered and became highly materialistic. This left people, such as the character of w***y Loman, questioning their life and feeling secluded from this new wave of materialistic dream and the abandonment of self sufficiency. Along with this, other plays such as Cartwright's Road was written and set in eighties Britain, in a northern Lancashire town. This was a time of high unemployment, particularly in the North, under Thatcher's conservative power. The working class were hit hard and many declined into poverty, any dreams at this point would appear hopeless faced with recession and a government that showed no remorse to the characters depicted in Road. Both were faced with times of dramatic change that both sets of characters could not adjust to cope with, which is where escapism is used. ...read more.

The positioning of scenes such as these let the imagined characters break all boundaries by entering or leaving rooms through "walls". This further represents the fragile psychological state of w***y and how his mind has no restrictions and is unable to differentiate reality from creations of his own mind. w***y constantly refers to the past as more desirable, the first time w***y is seen lapsing off into the past is when he encounters Biff after arriving home. The conversation between w***y and Linda reflects w***y's disappointment in Biff and what he has become. After failing to deal adequately with his feelings, he escapes into a time when things were better for his family. The fact he is more engrossed with memories than the present day, shows his willingness to escape to the past; where his life was once idyllic, and his lack of compassion to stay in reality. This type of escapism can also be identified within Road, particularly in Jerry's monologue where the opening line states "I can't get over it. ...read more.

The end of Road depicts a group of characters chanting together "Somehow a somehow a somehow - Might escape". This is an unrealistic technique used to restore the hope and dreams that had been diminished throughout the entirety of the play. It also re-assures the audience that there might be someway out of this squalid existence that has been portrayed, and that even after everything, there is underlying hope. However, in complete contrast to this Death of a Salesman's closing scenes portrays w***y's funeral. His constant dream-like existence is finally exposed to show w***y for who he really was. The reality is enforced and everything dream-related has died with w***y, leaving the harsh truth. In both plays, dreams and escapism are used thoroughly to uplift the tragic reality of the era in which the plays are set. Although, different strategies in both are used to cope with harsh realities they both provide a form of escapism for the characters and audience alike. Whether this is the humour, drink, s*x and drugs present in Road or the constant reliance on the past and denial of present reality featured in Death of a Salesman. ...read more.