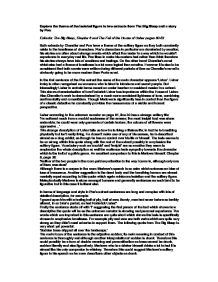 Explore the theme of the isolated figure in two extracts from The Big Sleep and a story by Poe. Extracts: The Big Sleep, Chapter 6 and The Fall of the House of Usher

Explore the theme of the isolated figure in two extracts from The Big Sleep and a story by Poe. Extracts: The Big Sleep, Chapter 6 and The Fall of the House of Usher pages 80-83 Both extracts by Chandler and Poe have a theme of the solitary figure as they both constantly relate to the loneliness of characters. Poe's characters in particular are dominated by emotion; his stories are often about strange events which affect the reader in a way which he wouldn't experience in everyday real life. Poe likes to make his readers feel rather than think therefore his stories always have lots of emotions and feelings. On the other hand Chandler's novel which also had a theme of loneliness is a lot more logical than emotive. However it is also to be considered that both novels were written during different periods of time so Chandler's novel is obviously going to be more modern than Poe's novel. In the first sentence of the Poe extract the name of the main character appears 'Usher'. Usher today is often recognised as someone who is hired to introduce and escort people. But interestingly Usher in archaic terms meant an under teacher or assistant master in a school. This shows characterisation of how Roderick Usher has importance within the House of Usher. ...read more.

Surely, man had never before so terribly altered, in so brief a period, as had Roderick Usher!' Firstly the sentence starts off with 'I' suggesting the first person of the text which shows how descriptive the quote will be as the unknown narrator is showing real personal experience. The words which are important in this sentence are quite short which shows the lexis is specifically chosen to emphasize loneliness. For example pity and awe are both verbs which are quite very strong so they didn't need adverbs to support them. The following quote from The Big Sleep is very short yet powerful: 'Sodden trees dripped all over the landscape.' The main focus of the sentence is the adjective sodden; its main meaning in context of this sentence is thoroughly wet although another interpretation of sodden is drunk. Therefore this could possibly be a form of double meaning and personification as trees cannot be drunk, sodden literally and also figuratively. Marlowe who is a drinker himself drinks a lot in fact it is almost like his only companion is whiskey. Therefore this could suggest Marlowe's solitary figure in his speech as he even describers other objects as drunk. In both texts even the description of places are so intense and breath taking which expand on the solitary figures in the story. ...read more.

Hard boiled fiction uses slag and irony often as it focuses readers on individual parts of the novel. Hard boiled fiction uses vivid but often sordid urban backgrounds, and fast-paced, slang dialogue. Overall both texts emphasize and portray the solitary figure as Marlowe and Usher which are two genuinely very lonely figures. This is a huge advantage for both texts; The Fall of the House of Usher text in particular continues to describe Usher and his surrounding settings as very different and lonely. The Big Sleep uses lots of figurative effects such as metaphors, similes and personification. Poe's extract uses lots of complex sentences to add as much description as possible whereas on the other hand Chandler uses short sentences to build suspense therefore they both use different approaches to achieve the same purpose of enhancing the isolated figure. It is known that many of Poe's characters are almost always dominated by emotion. Poe also believed that writing should be about strange events which affect the reader in a way which he would not encounter in everyday life. In The Fall of the House of Usher the strange events vary from Madeline supposed to be dead to the house collapsing. The diachronic variation between both novels is incredible. Both plots have lots in common; deep mysteries and loneliness that the narrators have to unravel through intelligence and feeling. ...read more.