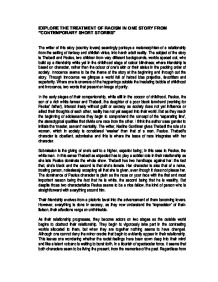 EXPLORE THE TREATMENT OF r****m IN ONE STORY FROM "CONTEMPORARY SHORT STORIES" The writer of this story (country lovers) seemingly portrays a metamorphism of a relationship from the setting of fantasy and childish virtue, into harsh adult reality. The subject of the story is Thebedi and Paulus, two children from very different backgrounds, worlds spaced out, who build up a friendship while yet in the childhood stage of colour blindness; where friendship is based on character, rather than the colour of one's skin or their status in the pecking order of society. Innocence seems to be the theme of the story at the beginning and through out the story. Through innocence we glimpse a world full of hatred bias prejudice, favoritism and superiority. Where one is unaware of the happenings outside the insulating bubble of childhood and innocence, two words that present an image of purity. In the early stages of their companionship, while still in the cocoon of childhood, Paulus, the son of a rich white farmer and ...read more.

But despite those two characteristics Paulus seems to be a nice fellow, the kind of person who is straightforward with everything around him. Their friendship evolves from a platonic level into the advancement of them becoming lovers. However, everything is done in secrecy, as they now understand the 'imprecision' of their- liaison, their affections verge on unthinkable. As their relationship progresses, they become actors on two stages as the outside world begins to obstruct their relationship. They begin to vigorously take part in the contrasting worlds allocated to them, but when they are together nothing seems to have changed. Although one cannot deny the minor cracks that begin to evidently appear in their relationship. This leaves one wondering whether the r****t feelings have been sown deep into their mind and like a latent volcano is waiting to burst forth, in a flourish of spectacular force. It seems that both characters seem to be living the present, from the memories of the past. ...read more.

A year went by before the same town the case was brought to trial, and a hearing date was set. This is also a stereotype, the way the judicial system is always failing the blacks, which is basically saying justice is not colour-blind. With all these obstacles stacked in front of her, why should she even begin to think that she could stand up against a white person? A feeling that is familiar with an oppressed black people. Paulus achievement is a typical one, the moral of the story being; the white always win. However I felt this story was too stereotypical and was written with favoritism towards the white, simply because it ended in a stereotypical way. It is also negative in the hidden message it seems to put across; that all unions between white and black can't end up successful. Although I felt all these negative feelings about the story, I am quite pleased in the way Nadine Gordimer handled the stereotypes and showed the discrimination of society's structure in South Africa at that time. Mohamed Bille Musse Yr 11ss ...read more.