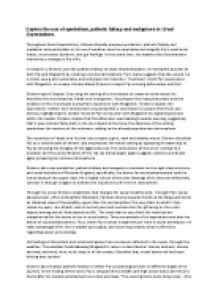 Explore the use of symbolism, pathetic fallacy and metaphors in Great Expectations.

Transfer-Encoding: chunked ﻿Explore the use of symbolism, pathetic fallacy and metaphors in Great Expectations. Throughout Great Expectations, Dickens liberally employs symbolism, pathetic fallacy and metaphor and particularly in his use of weather does he emphasise and magnify Pip's emotional states, unconscious opinions, and gut feelings. At the same time, the weather also foreshadows momentous changes in Pip's life. In Chapter 1, Dickens uses the pathetic fallacy to show characterization, mirroring the psyches of both Pip and Magwitch by creating a sinister atmosphere. Pip's name suggests that like a seed, he is small, young and vulnerable, and will grow into maturity / ?manhood?. Amid Pip's experience with Magwitch, an uneasy climate allows Dickens to depict Pip as being defenceless and frail. ...read more.

The comparison of the wind 'rushing' to a predator and the personification of the red sky being 'angry' again suggests violence and death, again proposing an ominous atmosphere. Dickens also uses symbolism, pathetic fallacy and imagery to comment on the rigid class structure and social injustices of Victorian England; specifically, the desire for social advancement and the moral decay of the upper class. He is highly critical of the class ideology of his time and effectively conveys it through imagery to address the injustices built into the class system. Through his novel, Dickens establishes that changes for social mobility exist, through Pip?s social advancement. After visiting Miss Havisham, Pip feels shame towards his life at the forge and forms an idealised view of the wealthy upper class. ...read more.

Day after day, a vast heavy veil had been driving over London?. Dickens also employs pathetic fallacy to reflect Pip?s psychological state in different stages of his journey. In the ending of the novel, Pip is stripped of his wealth and high social status and returns home after his modest employment as a clerk overseas. ?The evening mists were rising now[?]the broad expanse of tranquil light?. Again, Pip?s mood is conveyed through his environment. The clearing weather of home suggests he is now content and comfortable with his working class roots. Dickens romanticises the country and the working class ideals, associating it with morality and happiness. He often juxtaposes the images of the countryside with the city and the upper class to emphasise that it is the seat of corruption and despair. ...read more.