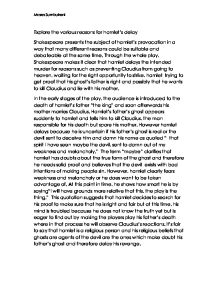 Explore the various reasons for hamlet's delay Shakespeare presents the subject of hamlet's provocation in a way that many different reasons could be suitable and debateable at the same time. Through the whole play, Shakespeare makes it clear that hamlet delays the intended murder for reasons such as preventing Claudius from going to heaven, waiting for the right opportunity to strike, hamlet trying to get proof that his ghost's father is right and possibly that he wants to kill Claudius and lie with his mother. In the early stages of the play, the audience is introduced to the death of hamlet's father "the king" and soon afterwards his mother marries Claudius. Hamlet's father's ghost appears suddenly to hamlet and tells him to kill Claudius, the man responsible for his death but spare his mother. However hamlet delays because he is uncertain if his father's ghost is real or the devil sent to deceive him and d**n his name as quoted " that spirit I have seen maybe the devil, sent to d**n out of my weakness and melancholy." ...read more.

When hamlets get proof that Claudius is indeed the murderer, the opportunity of killing him in the church presents itself but hamlet does not take it because he does not want to send Claudius to heaven as quoted from his soliloquy " a villain kills my father and I, son do and send him to heaven! No" hamlet withdraws from killing Claudius because Claudius has confessed his sins and if he dies now, Claudius will go to heaven to enjoy while he and his father suffer in h**l and clearly hamlet does not want that. One of the reasons he does not want them is the fact that he does not want let down his father's ghost which told him to kill Claudius in sin so that he suffers the same fate as his father and hamlet clearly wants Claudius to suffer for killing his father. After he withdraws, hamlet says to himself that he will wait for the time when Claudius is in sin as his father was and then strike. ...read more.

However, other reasons for the right time might be that Claudius is a king and so well guarded that it's not easy for hamlet to strike him down and hamlet fears the consequences if he kills Claudius. He fears he will hurt his mother for a start which he does not want to happen and secondly, he has no clear proof to prove that Claudius is the villain except for the ghost which people assume is an agent of evil or the devil and so people will deny his proof. Hamlet wants Claudius to be seen as the villain but if he kills Claudius, people will assume that he is the villain and probably be driven out of the country. In conclusion, hamlet's provocation is due to many reasons which all make sense and sound right as presented by Shakespeare. His delay could be as a result of waiting for the right so that everything goes as planned by him and also the need to get concrete proof his father's ghosts is right to avoid deception by the devil which is smart. ?? ?? ?? ?? Moses Sumbukeni ...read more.