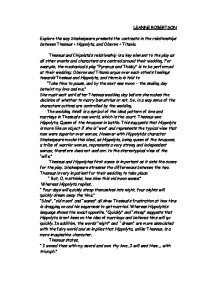 Explore the way Shakespeare presents the contrasts in the relationships between Theseus + Hippolyta, and Oberon + Titania.

LEANNE ROBERTSON Explore the way Shakespeare presents the contrasts in the relationships between Theseus + Hippolyta, and Oberon + Titania. Theseus and Chipolata's relationship is a key element to the play as all other events and characters are centred around their wedding. For example, the mechanical's play "Pyramus and Thisby" is to be performed at their wedding; Oberon and Titania argue over each other's feelings towards Theseus and Hippolyta, and Hermia is told to "Take time to pause, and by the next new moon - the sealing day betwixt my love and me," She must wait until after Theseus wedding day before she makes the decision of whether to marry Demetrius or not. So, in a way some of the characters actions are controlled by the wedding. The wedding itself is a symbol of the ideal pattern of love and marriage in Theseus's own world, which is the court. Theseus won Hippolyta, Queen of the Amazons in battle. This suggests that Hippolyta is more like an object if she is "won" and represents the typical view that men were superior over women. However with Hippolyta's character Shakespeare mocks this ideal, as Hippolyta, being queen of the Amazons, a tribe of warrior women, represents a very strong and independent woman, therefore does not conform to the stereotypical view of the "wife." ...read more.

courtiers and the couplets used in the play, but also suggests that Theseus and Hippolyta are now reconciled of their differences and also shows a sense of unity between the two. During theatrical performances, the two couples would be played by the same actors, which would suggest that the characters are "two sides of the same coin". Oberon and Titania are also key characters in the play. Their relationship unlike Theseus and Hippolytas is based on love whereas Theseus and Hippolytas have a specific reason behind it. It is not only love, but also true love as they are constant all the way through the play. This love and reason shows the contrasts between the two worlds of the court and the fairies but also the ideals of the relationship, in the court reason rules but in the fairy world love and passion rule in a relationship. Act two, scene 1 finds Oberon and Titania in the middle of an argument: "Ill met by moonlight proud Titania" " What, jealous Oberon?" The language in their argument shows that the characters have an equal relationship; both of them use insulting accusations, "proud" and "jealous". ...read more.

It is suggesting that passion (the argument) rules over reason (The human world of the court) therefore in this way Oberon and Titania are stronger characters than Theseus and Hippolyta. Unlike Theseus and Hippolyta, Oberon and Titania speak in couplets " We the globe can compass soon, Swifter than the wandering moon." This is a typical example of fairy language. Couplets express harmony and unity with the rhyming words. They show the strong nature of Titania and Oberon's relationship. As blank verse is used by Theseus and Hippolyta as a representation of the court, Oberon and Titania use blank verse as an expression of disharmony. For example, in the argument. When the two are reconciled at the end they revert back to couplets. Oberon and Titania and Theseus and Hippolyta's relationships are vital. They introduce some of the key themes and ideas central to the play. All other relationships are in some way linked to them, whether it is through themes or directly. Shakespeare uses them as a basis for creating two different worlds, which explore both the conventional and passionate sides to love and how it can be looked upon in different ways. They raise the questions should passion rule over reason? Or does passion in the end give way to reason? ...read more.