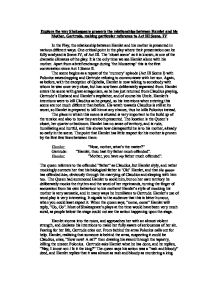 Explore the way Shakespeare presents the relationships between Hamlet and his Mother, Gertrude, making particular reference to Act III Scene. IV In the Play, the relationship between Hamlet and his mother is presented in various different ways. One critical point in the play where their presentation can be fully analysed is Scene IV, of Act III. The 'closet scene' as it is known, is one of the dramatic climaxes of the play. It is the only time we see Hamlet alone with his mother. Apart from a brief exchange during 'the Mousetrap' this is the first conversation since Act 1 Scene II. The scene begins as a repeat of the 'nunnery' episode (Act III Scene I) with Polonius eavesdropping and Gertrude refusing to communicate with her son. Again, as before, with the exception of Ophelia, Hamlet is now talking to somebody with whom he was once very close, but has now been deliberately separated from. Hamlet enters the scene with great antagonism, as he has just returned from Claudius praying, Gertrude's Husband and Hamlet's stepfather, and of course his Uncle. Hamlet's intentions were to kill Claudius as he prayed, so his intentions when entering this scene are not much different than before. His wrath towards Claudius is still at its worst, so Hamlet is prepared to kill him at any chance, thus he kills Polonius instead. The place in which this scene is situated is very important to the build up of the tension and also to how they are both presented. ...read more.

It seems that this scene could take place on Gertrude's "enseamed bed", although there are no stage directions to say this is true. Hamlet says, "My pulse, as yours, doth temperately keep time". This phrase can have two meanings. Primarily, 'pulse' meaning that they are blood related, but also that as a pair, they are so close their hearts beat together. The 'Oedipus Complex' explores sons having a desire to sleep with their mother, consciously or subconsciously. Whether this is true for Hamlet is hard to say, as we have to look at him as a character. Without this scene, it would seem unlikely that Shakespeare had any intentions of suggesting an Oedipal relationship between Hamlet and his mother. Over many years there has been wide debate over the subject of Hamlet and his 'Oedipus Complex'. We must remember that Hamlet is just a character of a play. The significance of this scene being set in the queens 'bedroom' is very important, as Hamlet makes many references to beds in the scene: "In the rank sweat of an enseamed bed / Stew'd", meaning sweaty and s***n-stained, like a prostitutes bed. This s****l language implies that Hamlet could well be talking to a future lover, when it is in fact his own mother. 'Bedrooms' are private, and conventionally places of s****l activity, so Shakespeare may well have deliberately presented the two on the bed, or in the bedroom, to suggest their s****l relationship. There are other possibilities that this scene was set in her bedroom. ...read more.

Also, Hamlet idolised his father to an extent where he wanted to be his father, maybe in terms of power, and the possession of his mother, Gertrude. Hamlets inability to have a successful relationship with Ophelia, his girlfriend, could be a problem created through his supposed l**t for his mother. He treats Ophelia with little respect, and subjects her to loathsome verbal abuse, bursting with s****l innuendo. "That's a fair thought to lie between a maids legs". In the mousetrap scene, Hamlet talks to Ophelia in this way to appear mad. But not only this, Hamlet carries on to show his immature attitudes towards love when he banters to Rosencratz and Guildenstern. "here's metal more attractive". Because of this male, adolescent type behaviour, it seems that Hamlet is not ready for love, and he cannot accept Ophelia's mature feelings that she has for him, thus their relationship is unstable. Shakespeare had obviously chosen to present the relationship between Hamlet and his mother with deliberate abnormalities. The aspects from the Oedipus complex and incest are interesting. There seems to be many connections with Denmark being corrupted and diseased, and maybe this is metaphorical for the mother and son's relationship, incestuous and corrupted. Also, Claudius's and Gertrude's relationship is the same, although at the time it wouldn't have been that abnormal for a King to marry his brother's wife, especially in Royal families. It was all about keeping money in the family, or keeping a bond, or peace with other relatives. In this case however, and what makes the relationship corrupt is the fact that Claudius killed his own brother. And to Hamlet, Claudius has not only usurped his father's crown, but also his mother's bed. ...read more.

This is an excellent essay which shows insight when discussing the main theme of the play which is the complex relationship between Hamlet and Gertrude. There is some excellent close analysis of language and the writer offers their own opinions and alternative readings.