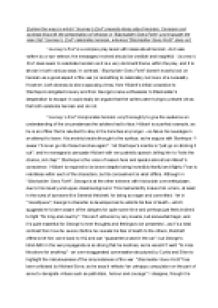 ﻿Explore the ways in which ?Journey?s End? presents ideas about heroism. Compare and contrast this with the presentation of heroism in ?Blackadder Goes Forth? and evaluate the view that ?Journey?s End? celebrates heroism, whereas ?Blackadder Goes Forth? does not. ?Journey?s End? is a complex play laced with ideas about heroism. As it was written by a war veteran, the messages involved should be credible and insightful. ?Journey?s End? does seem to celebrate heroism as it is a very dominant theme within the play, and it is shown in both various ways. In contrast, ?Blackadder Goes Forth? doesn?t exactly look on heroism as a good aspect of the war (or something to celebrate), but more of a necessity. However, both dramas do show opposing views, from Hibbert?s initial cowardice to Stanhope?s obligated bravery and from George?s naive enthusiasm to Blackadder?s desperation to escape: it could easily be argued that the writers were trying to present views that both celebrate heroism and do not. ?Journey?s End? incorporates heroism very thoroughly to give the audience an understanding of the circumstances the soldiers had to face. Hibbert is a perfect example, as he is an officer that is reluctant to stay in the trenches any longer ? so fakes his neuralgia in an attempt to leave. ...read more.

Stanhope carries this burden until his death. He has a tough outer-shell despite breaking down inside, and both this exterior mirage and his inner conflicts are exposed to the audience, which allows them to see the reality of life in the trenches. Despite his issues, he remains loyal to his duty. When Raleigh questions Stanhope drinking after Osborne?s death, Stanhope displays another war-earned trait by losing his temper and asking him if he thinks ?there?s no limit to what a man can bear??. This question reflects Stanhope?s personal issues and elaborates his drinking problem. It could also mirror Sherriff?s experience, and writing through Stanhope and the other conflicted characters provides a release ? through revisiting the war, almost. Heroism seems to be Stanhope?s anchor in the middle of chaos, but through this image he?s able to manipulate anyone under his command. This is similar to the authority he had in school (punishing younger boys for drinking, ironically enough) of which Raleigh remembers and so idolises him all his life. Raleigh is the opposite of Stanhope in terms of experience, and is fresh with innocence. ...read more.

Melchett and Darling are particularly mocked when they reassure Blackadder and Co. that they are ?right behind you?, to which Blackadder responds ?yes, 35 miles behind us?. Although this is humorous, there is a large grain of truth in it. In this sense, heroism isn?t celebrated - it?s seen as a necessity. As contemporary writers, Curtis and Elton are writing solely based on history and personal opinion, but successfully convey the idea that in the war it wasn?t a choice to be a hero or not. I also believe that although ?Journey?s End? celebrates heroism, Sherriff writes such individual problems and developed characteristics for each officer so they are recognised by the audience as actual humans - and when together they meet their ultimate fate, it all feels futile and very tragic, so much so that the officers can?t not be considered heroes. In conclusion, although ?Blackadder Goes Forth? and ?Journey?s End? are works of a different time, they both carry very important ideas regarding heroism that remain relevant today. Heroism is defined as ?great bravery?, and I believe the characters within these dramas - and all those involved in the war - truly epitomise what it is to be a hero. (1,476 words) ...read more.