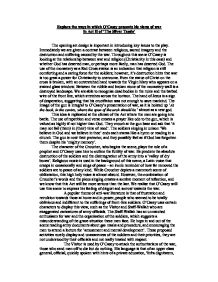 Explore the ways in which O'Casey presents his views of war in Act II of 'The Silver Tassie'.

Explore the ways in which O'Casey presents his views of war in Act II of 'The Silver Tassie' The opening set design is important in introducing key issues to the play. Immediately we are given a contrast between religious, sacred imagery and the destruction and suffering caused by the war. Throughout this scene O'Casey is looking at the relationship between war and religion (Christianity in this case) and whether God has deserted man, or perhaps more likely, man has deserted God. The use of the monastery as a Red Cross station is an indication that religion is still comforting and a caring force for the soldiers; however, it's destruction hints that war is too great a power for Christianity to overcome. Even the statue of Christ on the cross is broken, with an outstretched hand towards the Virgin Mary who appears on a stained glass window. Between the rubble and broken stone of the monastery wall is a destroyed landscape. We are able to recognise dead bodies in the ruins and the barbed wire of the front line, which stretches across the horizon. ...read more.

We realise that O'Casey will use this scene to express his feeling of disgust and sorrow towards the war. A popular theme of anti-war literature is that of frustration and revulsion towards those at home and in power, people who seemed to be totally oblivious and indifferent to the sufferings of front-line soldiers. O'Casey uses certain characters to display this view, such as the Visitor and Staff-Wallah who are exaggerated caricatures of army officials. The Staff-Wallah has an unmatched enthusiasm for war and the organisation of the soldiers, which suggests a misunderstanding of the grave situation these men face. He hops in and out of the scene reading army documents about gas masks and procedure, and encouraging the men to attend a lecture for 'amusement and mental development'. These proposed activities surely display and unawareness of the soldiers and their priorities, they are not understood by their officials and not really treated with respect. The Visitor is used by O'Casey to attack the authoritarians of the war, those who send men off to die but do nothing. ...read more.

He is suggesting that all soldiers shared these poor conditions and exhausting situations. The use of verse sharing also creates the impression of tight-knit community between the soldiers, as if they have nothing left but one another. Their silent sharing of cigarettes and smoking reinforces this feeling of solidarity - as does their shared protest against the Visitor, who strikes a match on the statue of Christ. O'Casey is also using this moment to show a total lack of respect for anything, whether it be God or Man, on the part of the commanding men. Overall O'Casey uses a variety of methods, including caricatures, set design, music and humour. However one of the most important is language. He can change the mood and purpose of the scene depending on the type of language used. The use of verse is particularly essential in creating more solemn a tone. The soldier's chanting is often very serious and displays more than anything, the attitudes of O'Casey towards the war. I feel that the writer sympathises with the ordinary fighters such as Barney, and tries to give them a voice in this scene. They represent the reality of war and give us a fairly sombre but strong anti-war message. ...read more.