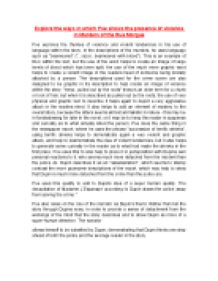 ﻿Explore the ways in which Poe shows the presence of violence in Murders of the Rue Morgue Poe explores the themes of violence and violent tendencies in his use of language within the story. In the descriptions of the murders, he uses language such as "besmeared" ("...razor, besmeared with blood"). This is an example of DLC within the text, but the use of the word helps to create an image of large levels of blood which has been spilt, the use of the much more graphic word helps to create a violent image in the readers head of someone being brutally attacked by a person. ...read more.

It also helps to add an element of mystery to the overall story, because the attack seems almost animalistic in nature - this may be in forshadowing for later in the novel, or it may be to keep the reader in suspense and curiosity as to what actually killed the person. Poe does the same thing in the newspaper report, where he uses the phrase "succession of terrific shrieks", using terrific shrieks helps to demonstrate again a very violent and graphic attack, and help to desmonstrate the idea of violent tendencies, but it also helps to generate some curiostiy in the reader as to what had made the shrieks in the first place. ...read more.

Poe uses this quality to add to Dupins idea of a super human quality. The decapitation of Madame L?Espanaye according to Dupin draws the police away from solving the crime: " Poe also relies on the role of the narrator as Dupin?s friend. Rather than tell the story through Dupins eyes, in order to provide a sense of detachment from the workings of the mind that the story describes and to show Dupin as more of a super-human detective. The narrator allows himself to be outwitted by Dupin, demonstrating that Dupin thinks one step ahead of both the police and the average reader in the story. ...read more.