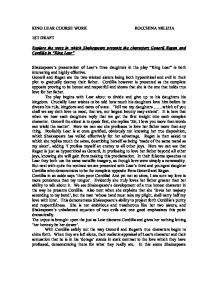 Explore the ways in which Shakespeare presents the characters Goneril Regan and Cordilia in &quot;King Lear&quot;.

KING LEAR COURSE WORK ROCCHINA MILIZIA 1ST DRAFT Explore the ways in which Shakespeare presents the characters Goneril Regan and Cordilia in "King Lear" Shakespeare's presentation of Lear's three daughters in the play "King Lear" is both interesting and highly effective. Goneril and Regan are the two wicked sisters being both hypocritical and evil in their plot to gradually destroy their father. Cordilia however is presented as the complete opposite proving to be honest and respectful and shows that she is the one that holds true love for her father. The play begins with Lear about to divide and give up to his daughters his kingdom. Crucially Lear wishes to be told how much his daughters love him before he divests his rule, kingdom and cares of state. 'Tell me my daughters ......which of you shall we say doth love us most, that we, our largest bounty may extend'. It is here that when we hear each daughters reply that we get the first insight into each complex character. Goneril the eldest is to speak first, she replies 'Sir, I love you more than words can wield the matter'. ...read more.

This all contributes to the wickedness that Goneril and Regan are rapidly being shrouded in. Deliberately using Lear's weakness to their advantage. Lear measures his personal worth in terms of his belongings. Shakespeare makes sure that Goneril and Regan are presented as heartless and vindictive as possible in this scene, when Lear enraged runs off they lock him out of the castle to teach him a lesson. This shows that they have no feeling of compassion or empathy toward their father but they think of themselves only. The fact that there is a storm brewing and that it erupts with great force is one of Shakespeare's clever devices of setting a certain atmosphere and mood, which has a great effect on the audience. This storm imagery plays an important part in the language of the play, as it reflects the chaos and breakdown Goneril and Regan have caused including the mental chaos they have created within Lear's mind. It emphasizes the drama of the situation and makes it look more cruel and sinister. For example, if the weather was sunny and cheery outside this scene wouldn't be as powerful. ...read more.

She plots to poison her sister we know this because when Regan exclaims ' sick, o' sick'. Goneril replies under her breath 'if not, I'll ne'er trust medicine'. Obviously Goneril has done the ultimate deed of wickedness by poisoning her sister who she was in it all together with. All over a man. This is ironic for the most devious and cunning of minds to be destroyed by a fact such as this. But it is this and this alone is what gives that awesome effect of retribution, and Shakespeare delivers this superbly. But what has happened to Cordilia? Cordilia remains righteous and heroic throughout and continues loyal to her father who treat her so badly in the beginning. Upon her return she tries to help and sustain her father. While he is asleep she professes her deep and abounding love for him, which she was unable to speak of before. Shakespeare has created three magnificently drawn out characters two evil and one good. The two evils stay evil through out. The good, good though out. These characters will go on forever and ever and will continue being studied for generations and generations, and many different views and opinions will be shaped about them. The way Shakespeare presents these characters will stay the same and that is what makes his plays truly special. ...read more.