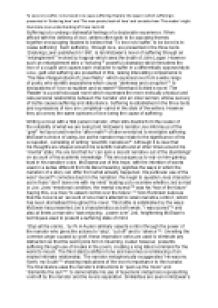 ﻿To Love is to suffer, to be loved is to cause suffering. Explore the ways in which suffering is presented in ?Enduring love? and ?The new poetry book of love? and consider how ?The reader? might illuminate ones understanding of these texts.42 Suffering is to undergo distressful feelings of a deplorable experience. When affixed with the defining of love, writers often seek to tie opposing themes together encouraging readers to believe that ?To love is to suffer, to be loved is to cause suffering?. Such suffering , through love, are presented in the three texts. ?Enduring Love? published in 1997, is Ian McEwan?s novel of suffering through an ?entanglement?1 evoked by tragedy which sees the death of John Logan. However such an entanglement stirs a ?torturing?2 powerful obsession which threatens the love of a couple and causes each character to suffer in a differentially opposed style. Love, guilt and suffering are presented in this, raising interesting comparisons to ?The New Penguin Book of Love Poetry? which explores love from a wide range of poets, who identify separations which cause ?darkness and corruption?3 to declarations of ?love so sudden and so sweet?4.Bernhard Schlink?s novel ?The Reader? is a post holocaust novel which expresses the more erotically physical and less personal relationship between the narrator and an older woman, whose secrecy of truths causes suffering and disturbance. Suffering is established in the three texts and expressions of love are completely varied in the style of the writers. However they all convey the same opinions of love being the cause of suffering. Writing a novel with a first person narrator, often stirs doubts from the reader of the reliability of what we are being told. McEwan?s narrator Joe informs us of the ?grief? he faced and how the ?after math?5 of later events led to inevitable suffering. McEwan?s choice of using Joe as the narrator may relate to the significance of his occupation, consisting of writing ?scientific narratives?6 .Although it is clear that his thoughts are ...read more.

It is intriguing to note how grief of a loved one can equate to the effects of suffering in each of the three texts. The concept of grief has been interpreted as ?vague and ambiguous?42; authors present their own interpretations of grief generated through love in different dimensions. In ?Enduring Love? Chapter thirteen presents a semantic field of ?bereavement? in a ?perfect setting for sorrow?44. (setting) McEwan uses great detail by using verbs to illustrate Jean Logan?s character as the embodiment of grief through her ?greasy? hair and her stained ?cashmere sweater?45. It may be suggested that McEwan represents grief unjustly as Jean Logan not only desires to be put out of misery, of her husband?s death ?suffering the way she was?46 , but also her want of ?substantial proof? of her thoughts, that her husband was in an affair. Thus being the ?centre of her torment?. McEwan puts not only the reader in a mind of ease but also Jean who had to ?suffer? before ?she can have any kind of peace?47, after longing to find out the results raised by her ?suspicion?. Robert graves persona in ?the wreath? speaks of how his ?woman? ?shall be punished?39 .Graves creates a semantic field of un-forgiveness, as his oxymoronic sentences such as ?cared for me so, yet so ill used me? conveys signs of love ?cared for me so? but expresses how the persona still suffered ?a bitter year? highlighting that ?to love is to suffer?40. Interestingly this can be compared to ways Parry ?ill used? Joe, further showing that ?to be loved is to cause suffering?.. Michele Roberts suggests that ?Ian McEwan is always described as writing about gore and nastiness? this opinion is inforced in ?Enduring love? which intensely depicts Joes ?primitive terror? of Jed?s protestations of love. ?You love me and there?s nothing I can do but return your love?. Jed?s further proclamations of love for Joe are seen in his letters such as chapter 11 for example which tells us of ...read more.

McEwan binds three different love stories in this novel, Joe and Clarissa, Jean and Logan and Jed and Joe. Each love story with contrasting endings, one captures Jeans character, placing her in a realm of suffering by disallowing any chance of redemption now that her husband is ?dead?, the second also shows an ?enduring? suffering, the difference being that this one can only end when parry is ?dead? McEwan therefore closes the whole novel when parry is still alive, The last, being the fairytale ending of hope and love for Clarissa and Joe. This is of great significance in the book as it concludes with McEwan?s use of denouement allowing the reader to have unanswered questions resolved, but leaves the characters with a lack of hope. After Joe shot Parry, there were no "kisses and tears and conciliatory murmurs and words of forgiveness and love", Clarissa did not jump into his arms and forget about everything that had happened and Joe was left in acceptance that "perhaps [they] really were finished". If that was how the story ended, the readers' would not be satisfied by the ending, after following the lives of these two contrasting characters and identifying with them, that sort of ending would have been bad for the novel. Appendix 2 outlines the theme of enduring love so provides the perfect ending to the novel, the same way it begun, with love that is enduring. (tieing it up with a outstanding way to conclude all narratives and poems linking back to the task focus linking to question how poets contrast, resulting with my view) resembling the ways Elizabeth Browning hyperbolically states ?I love thee with the breath, smiles and tears of all my life?18 in ?Sonnet XLIII?. Rossetti?s poem ?song? ,using alliteration to present the persona?s will is to ?sing no sad song?16 her poem ?Remember? instructs her loved ones ?do not grieve?17. The poem starts ?Remember when I am gone away?, this paradoxical line intertwines the themes of life and death. ...read more.