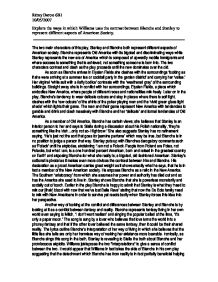 Explore the ways in which Williams uses the contrast between Blanche and Stanley to represent different aspects of American Society.

Explore the ways in which Williams uses the contrast between Blanche and Stanley to represent different aspects of American Society. . . The two main characters of this play, Stanley and Blanche both represent different aspects of American society. Blanche represents Old America with its bigoted and discriminating ways while Stanley represents the new era of America which is composed of upwardly mobile immigrants and where success is something that is achieved, not something someone is born into. The two characters contrast and clash as the play proceeds until the new dominates over the old. As soon as Blanche arrives in Elysian Fields she clashes with the surroundings 'looking as if she were arriving at a summer tea or cocktail party in the garden district' and carrying her 'valise.' Her virginal 'white suit with a fluffy bodice' contrasts with the 'weathered grey' of the surrounding buildings. Straight away she is in conflict with her surroundings, Elysian Fields, a place which embodies New America, where people of different races and nationalities mix freely. ...read more.

Earlier in the play Blanche is happy to admit that Stanley is what they 'need to mix our [their] blood with now that we've lost Belle Reve' stating that now the Du Bois family need to mix with New Americans in order to survive yet reacts badly when Stanley forces this idea into her perspective. Another way of looking at the conflict and differences between Stanley and Blanche is by looking at it as a conflict between fantasy and reality. Blanche represents fantasy living in her own world even saying to Mitch, 'I don't want realism' and singing the popular ballad of the time, 'It's only a paper moon.' The song is sung by a lover who believes that love turns the world into a phoney fantasy and that if the other lover believed the same fantasy, then it could be their shared reality. The lyrics outline Blanche's interpretation of her way of living in which she believes that the little lies she tells are only her harmless way of making her existence more bearable. ...read more.

Stanley's physical presence causes Blanche's fantasy world to fall away opening up the events in the surrounding streets, 'the hot trumpets and drums from the Four Deuces sound loudly' these two things representing drunkenness, crime and prostitution, the parts of New America which Blanche likes to think she is above. In truth she is deceitful like a criminal, promiscuous like a prostitute and a drunk. These aspects confront and impose on her and the noises from the outside put additional pressure on her aiding her departure from sanity. Other people in Elysian fields drink socially, Blanche keeps her drinking a secret, pretending not to know what Southern Comfort is and slipping 'liqueur' into her Coke. The difference between Blanche and Stanley & others, is that Blanche as an upright member of old American society is not proud of her drinking and drunken consequences seem to scar her mentally while drunken arguments between Stanley and Stella are forgotten the next day. Blanche as an old American comes across as weak and portrays old America as weak, while Stanley represents a New America that can forget tragedy and move on, constantly becoming stronger as time goes on. R�my Daroo 6B1 10/05/2007 ...read more.