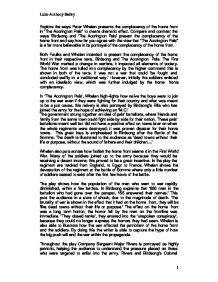 Both Faulks and Whelan intended to present the complacency of the home front in their respective texts, Birdsong and The Accrington Pals. The First World War marked a change in warfare, it impacted all elements of society. The home front was lulled into complacency by the higher command this is shown in both of the texts. It was not a war that could ‘be fought and concluded swiftly in a traditional way.’ However, initially the soldiers enlisted with an idealistic view, which was further indulged by the home fronts complacency.

In ‘The Accrington Pals’, Whelan high-lights how naïve the boys were to join up to the war even if they were fighting for their country and what was meant to be a just cause, this naivety is also portrayed by Birdsong’s Ellis who has joined the army for the hope of achieving an ‘M.C.’

The government strung together an idea of pals’ battalions, where friends and family from the same town could fight side by side for their nation. These pals’ battalions meant well but did not have a positive effect on towns later on when the whole regiments were destroyed; it was proven disaster for their home towns.  This great loss is emphasised in Birdsong after the Battle of the Somme. The death is illustrated to the audience as ‘dead towns without their life or purpose, without the sound of fathers and their children....’

Whelan also puts across how foolish the home front seemed in the First World War. Many of the soldiers joined up to the army because they would be receiving a decent income; this proved to be a great incentive. In the play the regiment are tracked from England, to Egypt to France. Whelan shows the devastation of the regiment at the battle of Somme where only a little number of soldiers ceased to exist after the first few hours of the battle.

The play shows how the population of the men who went to war rapidly diminished, within a few battles. In Birdsong explains that ‘800 men in the battalion who had gone over the parapet, 155 answered their names.’ This puts the audience in a state of shock, due to the magnitude of death. The brutality of war is shown in the effect that it had on the home front, they will be ‘like dead towns without their life or purpose.’ The effect on the home front was a long term horror; the horror felt by the men on the frontline was immediate. ‘They closed ranks’, they entered into the ‘unspoken conspiracy’, because they could no longer express the horrors they had seen. Whelan is also able to illustrate how the war affected the patriotism of the home front and the soldiers. By doing this the writer is able to capture the hype of how the big push will end the war within the propaganda.

Throughout the play Company Sergeant Major Rivers is portrayed as highly patriotic, helping the audience to understand the pressure placed on those who were targeted to enlist into the army. Rivers and Birdsong’s Colonel Barclay both are portrayed as highly patriotic. Colonel Barclay ‘was sitting on a bay horse with shiny, barrelled flanks. ‘As the companies...stood in silence, gazing at him”. Barclay is the epitome of what the naïve young soldiers long to become. The image that Barclay showcases is used as a stylistic device by Faulks to portray the illustration that was used to lull the home front into their complacent attitude. The home front had previously underestimated the effect of war; this is because of their idealism which was enhanced by battles such as Agincourt.

In act one, scene two Rivers puts  across his point with authority on the topic of Tom Hackford staying in the army, using highly persuasive language.This is seen within the first encounter of his character. The use of ‘I” makes it seem that Rivers is personally going to see to the tasks he is announcing, there is also an element of certainty within Rivers replies. Rivers takes two different approaches to grasp May’s understanding on this subject. ‘These are upsetting times for us all” from this statement Rivers is saying that all of them are going through the same thing, and it is only right for Tom to help solve it. The second way Rivers went about convincing May that Tom had no other chose was mentioning that he had sworn, ‘took the oath”, this is also a blunt reply, which does not contain an area for argument. In this dialogue May proves that she is not complacent and she knows that Tom has ‘thrown his future away’. Complacency is shown again through Rivers, in his statement of ‘what soldiering is about… comradeship.’

Rivers shows that he will take care of Tom Hackford so May need not worry about his safety; he does this with two clever pieces of script. ‘I shall be his very shadow” insinuating that Rivers will not let Hackford out of his sight. His second statement after May is still adamant that Tom shall not remain in the army, is he must ‘And into my care” this shows again that Rivers seems like he will personally protect Tom Hackford, this is an element of naivety as if he could save himself let alone someone else.

Faulks, in ‘Bird song”, is also able to portray the complacency of the home front in many different demeanours. Ellis smokes a ‘ glory boy” this is a cigarette, in this it shows the pure naivety of the home front claiming that their soldiers have already claimed their nations’ glory, when they are really going through torment. The home front was deceived and did not have full knowledge or any at all on the doings of the war. This was because of propaganda. The information that was sent out was always biased to make the readers believe good progress was being made. In a newspaper article in ‘The Accrington Pals” words like ‘decimated” were used, from that wording you would believe that Britain had a great advantage over their enemies. With the home front in full belief of what can only be described as blasphemous is what emphasises the complacency of these people.

Faulks once again demonstrates how the home front and the frontline were entirely different worlds by using Stephen’s depiction of his return to England, to emphasise the complacency of the home front. England is not only cut off physically by the Channel but also mentally. Faulks creates a graphic contrast; the home front was vacant compared to the graphic backdrop of the battle. This is presented in the line which says, ‘He saw the arches of the Ritz’... Faulks sends Stephen to an affluent part of London as a device to contrast the grim horrific reality he has left behind in the trenches. Grim torture was now Stephens’ reality and the home front fails to find any common ground with the reality of the front line.

Weir visits his home in England where the conversation between him and his father is unnatural and awkward; this emphasises the two separate worlds they now inhabit. Weir was so far removed from a place of ‘normality’ and safety, that it ‘did not bring back any sense of belonging.’ The reason for Weir’s isolation is because he has ‘seen things no human eyes had looked at before.’ The detachment of the home front from the front line is further presented by his father’s regard for an insignificant creature, ‘the toad’ as ‘a champion’ and not his son. Weir is demoralised by his father’s lack of interest. His father states ‘you’d like a bit of company after all…after, you know.’ Weir’s father cannot bare to vocalise the term war, because the sheer magnitude may become reality if spoken about, and so the home front would rather ‘read about it in the paper’. This ignorance continues to emphasise the complacency of the home front

As the play continues it is brought to mind the loss of faith within characters especially Arthur. Arthur questions God, ‘do you smile still?”. Again this attitude is very distinct from those of the home front with their false knowledge of the war due to propaganda. Whelan uses an element of dramatic irony because we the reader and audience of this script are able to witness how opposite the happenings are. In one of Ralph’s letters he exclaims ‘Now lost again” he could be referring to spiritual being lost. May and the home front will be unaware of this ‘This is no letter you'll ever get.”

The outcry of anguish and despair can also be seen in ‘Birdsong’. Stephen says the word ‘Jesus’... ‘It was part prayer, part profanity.’ Human nature had been disrupted words of prayer and adoration where used as blasphemy. The war took away and changed the ‘natural order’ of life.

The town of Accrington get told the truth, the real extent of the devastation. They are told that ‘there’s only seven of them left’ being that this is the first awareness of the truth since the start of the war they are shocked, I believe this is due to the dramatic effect that is presented through the repetition of ‘seven’. This scene also has an element of irony to it because in a previous newspaper article they say how ‘exhausted and decimated’ Germany are and Whelan’s technique is echoed again he says ‘they were wiped out’ referring to the regiment of Accrington.

Stephen in Birdsong explains to Isabelle in his letter how ‘some crime against nature is about to be committed.’ Stephen’s fear was not of the unknown but the fear of what the known can do, for example the ‘shells’. Wraysford knew that the battle would take away ‘men and boys…grocers and clerks, gardeners and fathers.’

What I have noticed from reading the play and the novel is from both accounts you are given a believable aspect of complacent nature. Both of these texts are of different genres, so the complacency is conveyed in different ways, but remain effective. Although, to an extent I do believe ' The Accrington Pals" seems more realistic on the view of the home front being that 'Birdsong" focuses on the torment and trench life more. Throughout the play Rivers constantly injects the pro with complacency and patriotic nature. In birdsong when Stephen returns home, the home front did not recognise him as being a hero, just because he did not look like one, I believe this is a strong element of naivety. Being that Accrington Pals is mainly based on the home front, it is easier for Whelan to refer to the attitudes of these people. The main difference i found between both extract was that Accrington Pals did not have a reaction as such towards the complacency, but birdsong did in the form of Stephen and Weir. Weir expressed his anger when he returns home to his parents and they did not want to know how he was feeling due to the war. With all this in mind I think that they equally expressed the complacency of the home front.