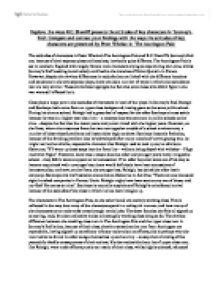 Explore the ways R.C. Sherriff presents the attitudes of key characters in 'Journey's End'. Compare and contrast your findings with the ways the attitudes of key characters are presented by Peter Whelan in 'The Accrington Pals' The attitudes of characters in Peter Whelan's The Accrington Pals and R.C. Sherriff's Journey's End are, because of their separate plots and locations, inevitably quite different. The Accrington Pals is set in northern England with largely female main characters trying to cope during war-time, whilst Journey's End''s setting is exclusively confined to the trenches of Saint-Quentin in France. However, despite the obvious differences in attitude that are linked with the different locations and situations in the two separate plays, there are also a number of ways in which the attitudes to war are very similar. These similarities highlight the fact that even those who didn't fight in the war were still affected by it. Class plays a large part in the attitudes of characters in both of the plays. In Journey's End, Raleigh and Stanhope both come from an upper class background, having gone to the same public school. During his time at school, Raleigh had a great deal of respect for the older Stanhope almost solely because he was in a higher year than him - a concept that was common in public schools at the time - despite the fact that the lower years rarely ever mixed with the higher years. ...read more.

The attitude to death in both of the plays is, unsurprisingly, a bleak one, but the ways in which death is dealt with are very different. In The Accrington Pals, when Annie sees that a pigeon that she thinks is England's Glory is dead, she assumes that her husband, too, is dead, and it seems to bring back all of the images of death that she's ever encountered in her life - like when she tells Reggie to burn the rug because she thinks that her dead father's been standing on it. After this event, more of the women begin to become sceptical of the stories in the newspapers that are possibly sugaring the pill; reporting things like "some of our brave soldiers fell here and there", notably Eva, who, upon coming to realise that she may have lost Ralph, begins to bathe an imaginary version of him. Then, at the end, May has a vision in which she wants to tell a ghost-like vision of a dead Tom how she really felt about him, but simply explodes in anger at Rivers about how futile and hypocritical the army is. In Journey's End, on the other hand, Osbourne and six other men die in a raid on a German trench, which causes Stanhope to enter into a state of quiet mourning whilst the rest of ...read more.

In conclusion, the attitudes of characters in Journey's End and The Accrington Pals are largely similar. However, because of the massively different situations that the plays' characters are confined to, they're forced to think differently about certain aspects of things. Journey's End's characters try their hardest to be completely devoid of emotion, because they have to be, whilst The Accrington Pals's predominantly female characters are much quicker to allow their own feelings to get dragged into things. These two mindsets, that of the numbed soldier and that of the emotionally charged female townie, inevitably have an effect on the characters' attitudes. However, amongst the men of the two plays, even though there's definitely a natural divide between the attitudes of the upper class and the lower class, as we have seen through our comparisons between the two plays, it's clear that, as officers become more experienced in war, their attitudes begin to become increasingly similar to those of their men - Raleigh even chooses to sleep and eat with his men rather than be with his fellow officers at one point, which shows how war can change one's initial attitude to class; it unites people of different backgrounds and beliefs in order to combat what most believed was a common enemy. Word Count: 1689 ...read more.