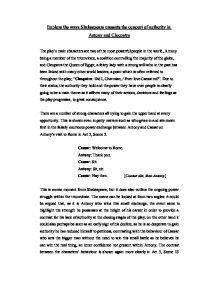 Explore the ways Shakespeare presents the concept of authority in Antony and Cleopatra The play's main characters are two of the most powerful people in the world, Antony being a member of the triumvirate, a coalition controlling the majority of the globe, and Cleopatra the Queen of Egypt, a feisty lady with a strong will who in the past has been linked with many other world leaders, a point which is often referred to throughout the play; "Cleopatra: Did I, Charmian, / Ever love Caesar so?". Due to their status, the authority they hold and the power they have over people is clearly going to be a main theme as it affects many of their actions, decisions and feelings as the play progresses, to great consequence. There are a number of strong characters all trying to gain the upper hand at every opportunity. This is shown even in petty matters such as who gives in and sits down first in the falsely courteous power exchange between Antony and Caesar on Antony's visit to Rome in Act 2, Scene 2. Caesar: Welcome to Rome. ...read more.

The gender reversal I have been referring to is also picked up on by the Romans and is described here in Act 1, Scene 4 by Caesar; "(Antony) is not more manlike Than Cleopatra, nor the Queen of Ptolemy More womanly than he;" This is clearly seen as a weakness and is one way Antony is losing his authority as a world power; he is losing the respect of his contemporaries, an example of the route the relationship takes, finally becoming more destructive than creative and leading to the couple's eventual downfall. The gender issues are not the only ones to be noticed by the other characters. Antony's constant struggle for power does not go unnoticed by the soldiers, especially Ventidius who, in Act 3, Scene 1 describes how he restrained from being too impressive in battle so as not to threaten Antony's authority: "Better to leave undone than, by our deed, Acquire too high a fame when him we serve's away." This shows the lower ranks are very aware of Antony's need to feel he is the one in control, the authority figure, and by this recognition they highlight exactly what it is he lacks; they falsify his superior fighting ability by lowering their own standards. ...read more.

They really respect his resourcefulness in the field and this is clearly portrayed to the audience whose respect for Antony then also grows. Antony and Cleopatra is an interesting play in that its characters are world figures and their actions not only affect themselves and people close to them, but also the majority of the globe; issues are settled not with individual duals but battles involving large fleets and armies. The audience is reminded of this global scale by comments made throughout the play and the constant flow of messengers gives the idea that something is always going on outside the scene you are currently watching. The audience hears the orders and commands given by Antony and Cleopatra and the fact that they have so much influence over the world certainly puts them in a position of authority in the audiences' eyes. It offers an interesting contrast to the intimate scenes we witness from the character's private lives, an angle seen not by all other characters but just by the audience who are given that unique privilege. It is thus through a combination of language, scene juxtaposition and character relationships that Shakespeare is able to convey to the audience the concept of authority in the play. ...read more.

The essay has many strengths. It is generally well-expressed and offers insights which are well-grounded in textual detail. The writer is also willing to reflect on different ways in which scenes could be interpreted.
A weakness of the essay is its heavy focus on Antony. Caesar, Lepidus, Pompey and Cleopatra are also relevant to the concept of authority in
the play.

The student responds well to the demands of the question by considering more than one point of view. For example, by using language such as "The scene can be looked at from two angles: it could be argued that...", they ...

The student responds well to the demands of the question by considering more than one point of view. For example, by using language such as "The scene can be looked at from two angles: it could be argued that...", they are showing that they can think widely about the character and are not just giving a one-sided viewpoint. (When analysing, it's always good to use words such as "could", "possibly" and "maybe" because it shows that you realise there are several interpretations of a character or a text). I was always told there are marks available for thinking about the question as well as the answer, something this student does: instead of just interpreting "authority" as Anthony's political power, they also look at more subtle ways authority is displayed, such as Cleopatra's possible authority in the relationship ("The power relationship between the lovers is also a main focus"). The student could build on this by making sure they consider other characters in positions of authority, such as Caesar, to show balance and the ability to range around the text.

The student uses good analytical skills, and by saying things like "This...works well dramatically" the student is not only evaluating the text, they are linking it to the audience and commenting on how it works as a play, which is good as it shows they are aware of the form of the text and that it would primarily be watched, not read. The student reaches a conclusion in the final paragraph, but it is not as clear as it could be. The final sentence answers the question directly, which is good as it shows that the student is on task and focused on what they have been asked. The judgment in this sentence is excellent because it brings together the different techniques the student has considered. However, it would be better to start the paragraph with "In conclusion..." because it would leave the examiner in no doubt that the student understands the need to summarise their ideas and relate it back to the question.

The student also supports their analysis with a high level of evidence from the text - for example, they appropriately quote "I take no pleasure/ In aught a eunuch has" when analysing Cleopatra's cruelty. This is good because some students make comments about a text without understanding it, and hope they can get away with it - this student, however, can back up what they are saying with evidence from the text.

The student's spelling, grammar and punctuation are largely correct, which is good because it means that the examiner can focus on the student's analytical skills rather than have to spend time working out what they mean. The paragraphing is excellent: by starting a new paragraph when they introduce a new concept, such as "This is not the only example of...", the student is showing they can organise their ideas and understand that there are different themes in a text. However, the student could improve their quality of writing by not using informal language, such as "feisty lady" or "Enobarbus is being a bit cheeky". This kind of language is inappropriate for an A Level essay, which is supposed to sound academic, but it is also missing an opportunity for analysis - instead of saying "a bit cheeky", the student could have analysed Enobarbus' characterisation and linked it to the question by saying something like "Enobarbus displays a slight disrespect for authority figures".