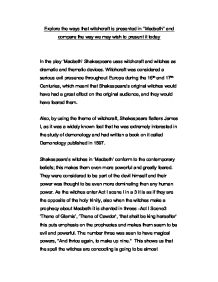 Explore the ways that witchcraft is presented in ''Macbeth'' and compare the way we may wish to present it today In the play 'Macbeth' Shakespeare uses witchcraft and witches as dramatic and thematic devices. Witchcraft was considered a serious evil presence throughout Europe during the 16th and 17th Centuries, which meant that Shakespeare's original witches would have had a great effect on the original audience, and they would have feared them. Also, by using the theme of witchcraft, Shakespeare flatters James I, as it was a widely known fact that he was extremely interested in the study of demonology and had written a book on it called Demonology published in 1597. Shakespeare's witches in 'Macbeth' conform to the contemporary beliefs; this makes them even more powerful and greatly feared. They were considered to be part of the devil himself and their power was thought to be even more dominating then any human power. As the witches enter Act I scene I in a 3 it is as if they are the opposite of the holy trinity, also when the witches make a prophecy about Macbeth it is chanted in threes -Act I Scene3 'Thane of Glamis', 'Thane of Cawdor', 'that shalt be king hereafter' this puts emphasis on the prophecies and makes them seem to be evil and powerful. ...read more.

The use equivocation, 'fair is foul, and foul is fair' is used to convey how something is neither one thing nor the other. This creates confusion amongst the audience and the characters in the play, such as Macbeth, who associates with the witches. When the witches say this in Act I scene I and Macbeth echoes this in act I scene 3, this makes Macbeth appear to be evil. This equivocation also gives the impression that nothing is as it seems, almost as if something, which could be trusted before, cannot anymore. In accordance to this Macbeth's first words echo the witches'; "So foul and fair a day." This shows us that Macbeth has not yet met the witches, but he is already beginning to talk like them, and thus implies that perhaps Macbeth has the potential to become evil and that is why he is chosen by the witches. Once again, in Act 1 Scene 3, we are faced with "thunder" and the witches enter the play. The scene is set on "a heath" and from this we can see that wherever the witches go, disorder follows, giving the impression that, their powers are much greater in comparison to those of mere mortals, because as soon as they appear, chaos arises and the scheme and order of things is turned upside down. ...read more.

Nowadays, people perceive that evil is based on factual evidence and events, rather than magic and superstition. A modern day audience would not fear the contemporary witches, as the Shakespearean audience would have. So in order for a modern day audience to perceive the witches as evil some directors choose to have men playing the parts of the witches to portray the confused sexuality of the witches as this would appear to be more supernatural and disturbing than having women disguised as witches. In conclusion to this we can see that the witches knew what would happen once they had given the prophecies to Macbeth, however, they did not tell him what to do, therefore he acted out of his own intention and for his own personal benefit. This shows us that human nature, if provoked, can be destructive and can destroy that around us and should in all honesty be more feared than witchcraft itself. Even though, people in modern times are not frightened of witches and magic, it all comes back to hunger for power and money and that is how Macbeth came to become a murderous, over-ambitious man, because he feared that he would not become rich and powerful. So even though we are not still afraid of witches, we still kill for money and power, and this is an issue carried through from the 16th century and before, to today. ...read more.