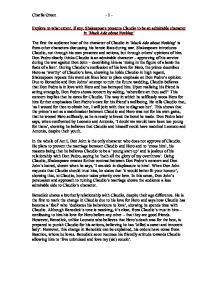 Explore to what extent, if any, Shakespeare presents Claudio to be an admirable character in 'Much Ado about Nothing'

Explore to what extent, if any, Shakespeare presents Claudio to be an admirable character in 'Much Ado about Nothing' The first the audience hear of the character of Claudio in 'Much Ado about Nothing' is from other characters discussing his heroic feats during war. Shakespeare introduces Claudio, not through his own presence and actions, but through others' opinions of him. Don Pedro clearly thinks Claudio is an admirable character - approving of his service during the war against Don John - describing him as 'doing in the figure of a lamb the feats of a lion'. During Claudio's confession of his love for Hero, the prince describes Hero as 'worthy' of Claudio's love, showing he holds Claudio in high regard, Shakespeare repeats this word six lines later to place emphasis on Don Pedro's opinion. Due to Borachio and Don Johns' attempt to ruin the future wedding, Claudio believes that Don Pedro is in love with Hero and has betrayed him. Upon realising his friend is acting strangely, Don Pedro shows concern by asking, 'wherefore art thou sad?' This concern implies that he cares for Claudio. The way in which he selflessly woos Hero for him further emphasises Don Pedro's care for his friend's wellbeing. He tells Claudio that, 'as I wooed for thee to obtain her, I will join with thee to disgrace her'. ...read more.

Benedick warns him to be careful concerning love and possible marriage - Claudio easily dismisses his friend's opinion, blinded by his infatuation and instead listens to Don Pedro who offers to woo Hero for him as Claudio worries his own 'liking might too sudden seem'. This tells us that although he may come across as slightly foolhardy, unlike many young men, he seems aware and cautious of this trait he possesses. Shakespeare presents Claudio, throughout 'Much Ado about Nothing', as a gullible character, believing every story that Don John dreams up. This is especially significant as; firstly, Don John is socially inferior to Claudio. Secondly, Don Pedro, one of Claudio's closest friends, is Don John's half-brother and therefore Claudio should know Don John well. Thirdly, because Don John hates Claudio and he should be aware of this and lastly, because they have been enemies in war. Claudio has no reason to trust the Bastard and the fact that he does, on two occasions, leading to almost disastrous consequences, shows his inexperience and insecurity - that he is so easily lead astray. The first time this happens is when Claudio pretends to be Benedick at the Masquerade Ball. Don John is aware of this and tells him that Don Pedro 'is enamoured on Hero', making Claudio jealous and upset that his friend has betrayed him. ...read more.

Claudio's rash confidence continues, even when Leonato and Antonio challenge him he tells them, 'away, I will not have to do with you' and tells them to 'draw to pleasure' him - bold words for one so young. All this irrationality is stripped away however when he realises he has been tricked and believes he is responsible for Hero's death, he is reduced to a sorrowful wreck as he confesses, 'sweet Hero, now thy image doth appear in the rare semblance that I loved it first'. The audience know his tears are in vain and that Hero is alive and we are pleased for him when we hear that Leonato plans to attempt to marry the two again. In conclusion, Shakespeare does present Claudio as an admirable character in 'Much Ado about Nothing', as many, if not all of his undesirable characteristics can be explained as those common to 16th Century men. Further more; all of the characters, excepting Don John, respect him, despite his youth, and even Borachio appears apologetic for his actions when he hears of Hero's 'death'. However, he definitely carries some materialistic traits and, although these would not have bothered a Shakespearean audience, to someone studying the play in the 21st Century they show Claudio in a different, if not entirely negative, light. Word Count = 2,197. External quotations in italics are taken from 'Much Ado about Nothing' York Notes Advanced. ...read more.