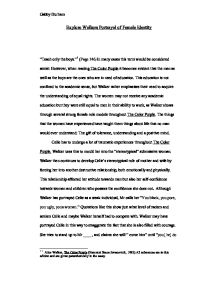 Explore Walkers Portrayal of Female Identity "Teach only the boys."1 (Page 146) In many cases this term would be considered s****t: However, when reading The Color Purple it becomes evident that the men as well as the boys are the ones who are in need of education. This education is not confined to the academic sense, but Walker rather emphasises their need to acquire the understanding of equal rights. The women may not receive any academic education but they were still equal to men in their ability to work, as Walker shows through several strong female role models throughout The Color Purple. The things that the women have experienced have taught them things about life that no man would ever understand: The gift of tolerance, understanding and a positive mind. Celie has to undergo a lot of traumatic experiences throughout The Color Purple. Walker uses this to mould her into the "stereotypical" submissive woman. Walker then continues to develop Celie's stereotypical role of mother and wife by forcing her into another destructive relationship, both emotionally and physically. This relationship affected her attitude towards men but also her self-confidence towards women and children who possess the confidence she does not. ...read more.

Although she was treated poorly by her "father", she listens to the bible and "Honor[s] father and mother no matter what." (page 43-44).This even included forgiving him for the constant s****l abuse. By obeying the Bible she had to obey her father, no matter what the consequence was. The dramatic betrayal of someone she could trust had been destroyed and therefore jeopardised her relationship with any other man, instead of feeling love or respect, she only felt fear. "That's the truth. I look at women, tho, cause I'm not scared of them." Although Mr_____ is her husband,their relationship appears to be one of convenience. When he first approached Alphonso it was to marry Celie's sister, Nettie. Alphonso however refused. Claiming that Nettie was too pretty and that he should have Celie instead. Compared to Nettie, Celie was hardly the trophy wife that Mr___ desired. "She ugly. .....But she can work like a man." (pg.18.) Mr ____ only wanted a wife to look after his kid and to satisfy his own selfish needs. Walker portrays Celie as an object only to be used and abused by men. ...read more.

By saying this Walker could be trying to express that Mr____ does it so he can feel like he has some control in his life. That because he can't control how Shug feels about him he takes it out on Celie instead on confronting the issue. The second man in Shugs life is Grady, who Shug introduces to Celie in such rash manner that it could be that Walker was using him a device for her to show Mr___ and Celie's feelings. This would then provide them with some common ground. Alice Walker has integrated her own experience with the events and issues of the 1930's into The Colour Purple with great skill, which should be admired. Her writing has shown that woman can easily be portrayed in many different lights and the female stereotype couldn't be further from the truth. Men have a kind of meanness that women don't possess. Women, though they may scream and swear, are not harmful in the way men are. Walker has shown that this phrase is s****t for both men and woman. As portrayed through Sophia woman can be harmful in the same way as men and as shown through Mr___ and Alphonso men can also be the ones to fear. Although it may be out of weakness and shame. ...read more.

A well written essay which contains many valid points and shows knowledge and understanding of the novel. It also shows knowledge of historical and social context. Statements are backed up by appropriate quotes in places but more needed.
The essay needs to be more structured and needs to use topic sentences to refer to the essay question at the beginning of each paragraph.
It is a very broad question and at times the student seems to have 'got lost' in the enormity of trying to give a thorough answer.