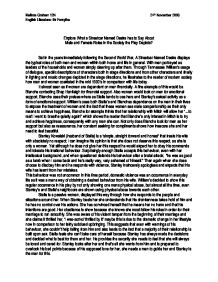 Explore What a Streetcar Named Desire has to Say About Male and Female Roles in the Society the Play Depicts?

Explore What a Streetcar Named Desire has to Say About Male and Female Roles in the Society the Play Depicts? Set in the years immediately following the Second World War, A Streetcar Named Desire displays the typical roles of both men and women within both home and life in general. With men portrayed as leaders of the households and women simply cleaning up after them. Through Tennessee William's usage of dialogue, specific descriptions of characters both in stage directions and from other characters and finally in lighting and music changes depicted in the stage directions, he illustrates to the reader of modern society how men and women coexisted in the mid 1900's in comparison with life today. It almost seen as if women are dependent on men financially. A fine example of this would be Blanche contacting Shep Huntleigh for financial support. Also women would look on men for emotional support, Blanche uses their praises where as Stella tends to use hers and Stanley's s****l activity as a form of emotional support. ...read more.

Stella is a passive woman, displayed this way through how she responds to the people and situations around her. When Stanley beats her she understands that his drunkenness takes hold of him and he has no control over his actions. She has convinced herself that he means her no harm and that his intentions are good. Her obedience is show because she knows she must follow his rules in order for their marriage to run smoothly. She was aware of his violent temper from the beginning of their marriage and she claims it thrilled her, 'I was-sort-of thrilled by it' maybe this is due to the dramatic change in her lifestyle now in comparison to her fairly subdued upbringing. This suggests that even with warnings of his behaviour, she couldn't help falling from him and also leads to the fact that a majority of their relationship is built upon s*x. Stella feels she can't take care of herself because Stanley has always made the decisions and decided what is best for them and her. ...read more.

Because Blanche cannot see around her dependence on men, she has no realistic conception of how to rescue herself, and does not realise that her dependence on men will lead to her downfall rather than her salvation. By relying on men, Blanche puts her fate in the hands of others. The men in this novel genuinely seem as straightforward and primitive as Stanley, maybe with the exclusion of Mitch, it seems that the lifestyle they lead and also the city and general acceptance of drinking regularly has made them like this. Women allow men to use physical aggression towards them, and men feel that this is acceptable behaviour. The women don't seem to have much control of their loves and in fact are quite weak when compared to the men. In conclusion to this essay I feel that the women were too passive and the men too aggressive, yet it seems to be acceptable behaviour with no-one at the time wanting to break the mould in order to change this. Melissa Graham 12N 24th November 2003 English Literature- Mr Forsythe ...read more.