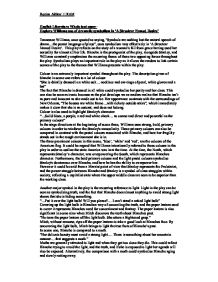 English Literature Whole text essay- Explore Williams use of dramatic symbolism in 'A Streetcar Named Desire' Tennessee Williams, once quoted as saying, "Symbols are nothing but the natural speech of drama...the purest language of plays", uses symbolism very effectively in 'A Streetcar Named Desire'. This play reflects on the story of a woman's fall from grace having used her sexuality for almost all her life. Blanche is the protagonist of the play, alongside Stanley, and Williams constantly emphasises the recurring theme of these two opposing forces throughout the play. Symbolism plays an important role in the play as it allows the readers to link certain scenes of the play to the themes that Williams presents within the play. Colour is an extremely important symbol throughout the play. The description given of blanche in scene one refers to a lot of colour. "She is daintily dressed in a white suit... necklace and ear-rings of pearl, white gloves and a hat" The fact that Blanche is dressed in all white could symbolise her purity and her class. This can also be seen as ironic because as the plot develops we as readers realise that Blanche isn't as pure and innocent as she made out to be. ...read more.

This could reflect Blanche trying to avoid the light, and the truth, and if she is exposed to light her agenda will also be exposed. Alternatively, the comparison with a moth could symbolise Blanche aging and slowly rotting away. Music is an important symbol throughout the play, as it mainly reflects on Blanches emotions. Williams uses the 'blue piano' to reflect on the lives of those in New Orleans. The blue piano is described to play lively, jaunty music. Blanches fragility and the lively music of the blue piano is contrapuntal as the music doesn't match the description of Blanche. This again gives us the impression that she wont fit in to the atmosphere of New Orleans. Another reference to music is the Varsouviana Polka tune. This music represents death in the play, as it was the music Blanche was dancing to with her husband before he killed himself. Therefore every time Blanche feels as if she is losing control of reality, she hears the Varsouviana playing in her mind. An example of this is just after Mitch has exposed her as a liar, and the Mexican woman enters selling funeral flowers. ...read more.

Williams also emphasises on his desperate need for power over everyone, especially Blanche. Generally the viewpoint of this play would be of a man who is aggressive towards his wife. However from a feminist viewpoint, it would be seen as women attempting to survive in a world dominated by alpha-males such as Stanley. The r**e scene could be seen as the beginning of Blanches end. However there are hints before then that show a change in Blanches personality. For example in scene ten, "...Crumpled white satin evening gown and a pair of scuffed silver slippers." This occurs just after Mitch exposes Blanche. The scuffed shoes could symbolise Blanches elegance being tarnished as her secrets and lies have been exposed. I think that symbolism is one of the most important dramatic techniques used in the play, as it allows the readers to explore different interpretations of each characters actions. It also allows the readers to come to their own conclusion about what the play means. Williams once said, "Art is made out of symbols the way the body is made out of vital tissue". What Williams is trying to portray is that in order for a play to be appreciated the way it should, symbolism is necessary. ...read more.