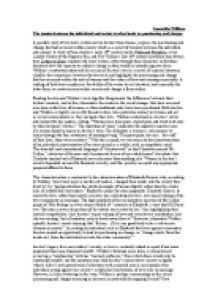 ﻿Anoushka William The tension between the individual and society is what leads to questioning and change. A parallel study of two texts, written in two distinct time frames, exposes the questioning and change that had occurred within society itself, as a result of tensions between the individual and society. A study of Jane Austen?s early 19th century novel, Pride and Prejudice, set in Landed Gentry of the Regency Era, and Fay Weldon?s late 20th century epistolary non-fiction text, Letters to Alice, explores the ways writers, often through their characters in fictitious literature have the capacity to catalyse change in their world by introducing new ideas. Weldon?s contextualisation and discussion of Austen?s text as a novel of superior literature, clarifies the connections between the two texts and highlights the questioning and change that has occurred within the role of women and the values of love and marriage especially. A reading of both texts emphasises the ability of the writer to use literature, and especially the letter-form, to create tension within society and change it from within. Reading Austen and Weldon?s texts together foregrounds the differences between their distinct contexts, and in this, illuminates the reader to the social changes that have occurred over time in the lives of women, as their traditional roles have been questioned. ...read more.

In creating an individual such as Elizabeth that lives against convention Austen created an opportunity to lead to questioning an change, as ?change works from the inside out, from the individual out into the wider community.? Austen?s legacy lives on in today?s society, as love is certainly valued as equal if not more important than mere financial benefits. Weldon?s fictional niece Alice is characterised as having a ?relationship? with her ?married professor,? from which there would only be emotional benefits, not the monetary ones that Austen?s conservative society so highly valued. Alice?s own promiscuous behaviour with a married man is an example of an individual acting against her society?s established conventions of love only in marriage. However, in Alice behaving in this way, Weldon is perhaps commenting on the social questioning and change occurring in her own society with the ongoing Second Wave of Feminism movement. Women with new work opportunities and less of a financial dependency on men could pursue relationships merely out of love or l**t. Alice with her future university degree and Weldon with her highly lucrative book tour that frameworks the letters are examples of such women free from the patriarchal constraints of Austen?s time. ...read more.

However, it is Alice?s individuality and refusal to listen when her aunt tells her to ?get on with your studies? that receives the final respect, as she becomes a ?best-selling author? Similarly, Darcy?s reprimanding of Elizabeth in his apologetic letter to her causes a moral tension within herself, and the exclamation ?How despicably I have acted!? followed by a cummulation of her faults, acts to convey the change within her character. This in itself also conveys one of Weldon?s tenets of superior literature as the best novels have a ?happy ending?through moral development.? In listening to the behavioural demands of her society and relinquishing her own narrow-mindedness Elizabeth is able to grow as a person, and reflects the capacity to literature to catalyse positive changes. In reading Austen and Weldon?s texts, Pride and Prejudice and Letters to Alice together, readers are enlightened as to the changes through the contexts and values, especially in regards to the role of women. It can ultimately be seen that the tension between individuals and society, both embodied in various ways and forms in literature, is what leads to questioning and change, which can ultimately reshape meaning and values across contexts. ...read more.