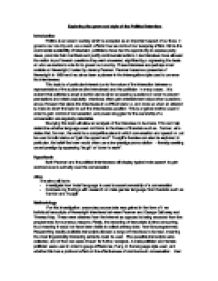 Exploring the genre and style of the Political Interview Introduction Politics is an area in society which is accepted as an important aspect of our lives. It governs our country and, as a result, affects how we conduct our everyday affairs. Since the commercial availability of television, politicians have had the opportunity to express party views, promote their manifesto and justify controversial actions. Live interviews have allowed the nation to put forward questions they want answered, significantly progressing the basis on who we decide to vote for to govern our country. These interviews are perhaps most notable on Newsnight, hosted by Jeremy Paxman. Paxman became a presenter of Newsnight in 1989 and has since been a pioneer in the interrogative style used to unnerve his interviewees. This topic is of particular interest due to the nature of the interaction between a representative of the audience (the interviewer) and the politician. In many cases, it is evident that politicians adopt a tactful stance when answering questions in order to prevent perceptions and retain popularity. Interviews often gain entertainment value when questions are put forward that place the interviewee in a difficult stance, and more so when an attempt is made to divert the topic to suit the interviewees position. This is a typical method used in order to gain control of conversation, and power struggles for the ownership of a conversation are regularly detectable. Studying this topic will allow an analysis of the interviews to be made. This can help determine whether language used conforms to the ideas of theorists such as Tannen, who states that, for men, the world is a competitive place in which conversation and speech must be used to build status or "gain the upper hand". ...read more.

The connotation of annoyance from this word infers the severity of the interview is little more than a quarrel to Galloway. This could be a dismissive strategy to highlight Paxman's trivial retaliations. Towards the end of the interview, Jeremy Paxman again insinuates that Galloway's motives were to insight racial tensions. At this point, George Galloway deviates from response and again directly confronts the questioning- "You are actually conducting one the most - even by your standards - one of the most absurd interviews I have ever participated in". Use of the parenthesis "even by your standards" shows Galloway is aware of the language techniques Paxman employs, as if trying to lure the interviewee into giving a desired response. This indicates the demise of the interview as the off topic nature shows a refusal to answer. An attempt to win authority of the conversation is made with the simple sentence "I have just won an election". This comes as a declaration of power and popularity, which arguably, portrays Galloway in an egotistical light, yet proves supremacy nevertheless. Paxman's response "I'm not insulting them, I'm not insulting you" displays subtle male gender language. The contraction "I'm" leans towards 'Covert prestige', a theory first introduced by William Labov. The language, despite being inferior to the formal "I am", suggests a more secure and less socially aspirational stance, conveying a "tough" or "down to earth" message. Peter Trudgill's research in the 1970s into language and social class also comes to similar conclusions in regard to covert prestige. The role reversal of questions by the interviewee and answers by the interviewer continues as Galloway asks for congratulations on his victory. ...read more.

However, the level of analysis was limited in that only one male-male extract and one male-female extract was used. It was my intention to include a mixed gender interview, despite the aims being male language orientated, so the effectiveness of male language in asserting authority could be gauged against a control (female language). Yet the use of two extracts means that generalisations can't realistically be drawn from the findings. Use of a third extract would have allowed me to confirm concordance in analysis making the results more valid. Having said this, it can be assumed that interviewers, in this case Jeremy Paxman, do not always dictate the way an interview is conducted, as politicians deviate from questions posed by stating information that helps their political stance, despite this often being irrelevant. This investigation does help contribute to the idea that men still retain an air of dominance in language use, perhaps suggesting men and women are not on a level playing field in the practice of, in this case, politics. However, due to the limitations in the amount of data used, such an assumption is questionable. The fact that women do play a very large part in politics in modern society poses the question - are male language traits adopted by females in order to establish equality, or are other techniques used to earn powerful positions. This would be a possible avenue for future research. Some would say the use of language to express an idea is extraneous, but rather it is the significance and quality of the idea that gains a position of authority. ...read more.

This is an excellent investigation. Clearly written and logically structured, it gives a very thorough answer to the question.
Close and accurate analysis of language and well chosen quotes with references to other appropriate theories throughout make this a very convincing piece of research.