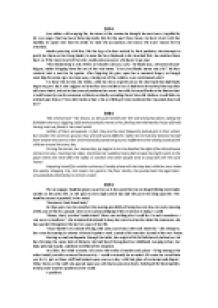 Eyes ablaze with a raging fire, he stares at the woman he thought he once knew.

﻿2014 Eyes ablaze with a raging fire, he stares at the woman he thought he once knew. Engulfed by his own anger that has been fostering inside him for the past three hours, he feels struck with the inability to speak. Not that he needs to state the accusation; she knows the exact reason for his emotions. Hands quivering with fear, like the legs of a deer noticed by their predator, she attempts to gently lay them on his strong hands, to ease the fury displayed in his clenched fists. He snatches them back. As if the mere touch of her skin would poison anyone who dares to go near. ?This relationship is a lie, Helen. Or should I call you, Sofia,? he finally says, with an air of pure disgust, malice dripping from the use of her real name. ?Even your b****y name was a lie!? His face contorts into a snarl as he speaks. After lingering his gaze upon her a moment longer, as though searching for some sign, he steps away, staring out of the window, eyes continuously alert. I?ve done this to him, she thinks, while he chews repetitively on his short nails that had finally begun to grow back. ...read more.

?Please, Matt, you don?t understand. There was nothing else I could do. I?m not a murderer. I was never a murderer.? she remains determined to keep her voice level as she states the innocence she has queried throughout the last ten years of her life. ?I have hated every minute of lying; I did want you to know the truth. Honestly.? she whimpers, her voice decreasing in volume with each spoken word, scared of his reaction. Scared of her new future. Starting a small earthquake through the table, the weight of his fist falls heavily before her. His face forming the same look of distaste she had faced throughout her childhood. Gasping in fear, her body jolts backwards, suddenly terrified of the situation. You idiot, her mind screams. Of course the truths of murder and prison ? living amongst the other hated juveniles removed from society ? would eventually be revealed. Of course he would hate you for it, just as those staff had looked upon you every day with that glare of contempt and disgust. Either them, or the staff who peered upon you with that expression of pity, full of guilt for their inability to help solve another problem in the world. ...read more.

Frozen, she remains staring at the crime committed by her own hands, her nervous system too shocked to process the information before her, or to tell her how to respond. What have I done? Terrified of calling for help, terrified of staying; she begins to run. 2014 Wildly grabbing any nearby belongings, Matt starts throwing them into a bag, muttering accusations at her. ?No, please, I love you,? she begins to beg; desperate to make him stay. Despite knowing every word is in vain ? even doubting the fact that she deserves love ? she continues, urged on by her own feelings and her reluctance to surrender the life they have begun together. Reaching the door, he pauses, ?I did love you, Helen. But you aren?t the person I thought you were and this relationship isn?t what I thought it was. I am leaving you, and I am not coming back. Do you understand?? Her eyes glazed with tears, she responds with a slight nod, signifying her understanding. As the door slams behind him, she gives in to the sadness that has been growing inside her. Backed against the wall, her legs fall under the weight of her own misery, tears stream down her woeful face. He was everything to me and I failed even him; everything I touch I ruin. What right do I have to this life? ...read more.