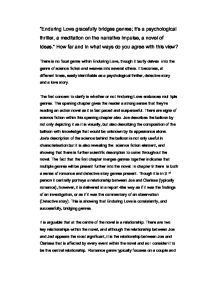 Enduring Love gracefully bridges genres; it(TM)s a psychological thriller, a meditation on the narrative impulse, a novel of ideas. How far and in what ways do you agree with this view?

"Enduring Love gracefully bridges genres; it's a psychological thriller, a meditation on the narrative impulse, a novel of ideas." How far and in what ways do you agree with this view? There is no focal genre within Enduring Love, though it tautly delves into the genre of science fiction and weaves into several others. It becomes, at different times, easily identifiable as a psychological thriller, detective story and a love story. The first concern to clarify is whether or not Enduring Love embraces multiple genres. The opening chapter gives the reader a strong sense that they're reading an action novel as it is fast paced and suspenseful. There are signs of science fiction within this opening chapter also. Joe describes the balloon by not only depicting it as it is visually, but also describing the composition of the balloon with knowledge that would be unknown by its appearance alone. Joe's description of the science behind the balloon is not only useful in characterisation but it is also revealing the science fiction element, and showing that there is further scientific description to come throughout the novel. The fact that the first chapter merges genres together indicates that multiple genres will be present further into the novel. ...read more.

However, when you begin to analyse other aspects of the novel, such as characterisation, the genres come to surface and it is simple to identify and differentiate between each of them. Particularly when, in chapter nine, there is a change from 1st person to 3rd, and the genre seems to change with it from a psychological thriller, (evident in Parry's growing obsessive tendencies toward Joe), to a romance novel. Chapter four gives the initial sense of a psychological thriller genre. It follows the first phone call from Jed to Joe, which also marks the beginning of a 'second' plot. At the beginning of the novel it seems that the primary plot is to be situated about John Logan's death, and for Joe to find out who let go of the balloon first - and thus find out who could be held responsible for John Logan's death. However, chapter four does not continue the novel in the same fashion as the previous chapters. The pace is slower, and Joe becomes distant from his emotions and more involved in solving and calculating. It is the beginning of the rift that forms between the genres of science and romance. ...read more.

Overall, the novel shows that it has the capacity to carry several genres, often working simultaneously within the plot. There is a small number of times throughout the novel where there is a sense that the genre is unsuited to the character, specifically when Joe goes to get the gun, and again when Clarissa says to Joe that she thought they were "over", rather than showing the determination to 'make it work' like readers expected her to. However, I agree with the view that, for the most part, the novel demonstrates the ability to gracefully bridge genres; and that at the heart of its genre is the element of a psychological thriller and science fiction. I also agree that Enduring Love is a 'novel of ideas', as it shows human relationships in their most arbitrary form possible within a novel, and with all the events that Joe describes to have been involved in. The novel is successful in providing distinct and merged genres, in that it shows combinations of action, psychological thriller, investigative/detective story, science fiction and human relationships. More often than not, Enduring Love maintains impressive effects where the reader is both captivated by the suspense and the action of the central events, and enthralled by the characters and the most intimate details of their lives, all through the complex variations and combinations of genre. ...read more.