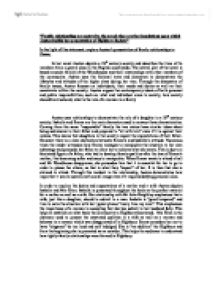 &quot;Family relationships are central to the novel; they are the foundations upon which Austen builds her presentation of Highbury

“Family relationships are central to the novel; they are the foundations upon which Austen builds her presentation of Highbury Society”

In the light of this statement, explore Austen’s presentation of family relationships in Emma.

In her novel Austen depicts a 19th century society and describes the lives of its members from a gentry class in the English countryside. The central plot of the novel is based around a family of the Woodhouses and their relationships with other members of the community. Austen uses the fictional town and characters to demonstrate the lifestyles and attitudes of the higher class during her time. Through the discussion of family issues, Austen focuses on individuals, their needs and duties as well as their constraints within the society. Austen argues the contemporary ideals of both personal and public responsibilities, such as: what and individual owes to society, how society should be structured, what is the role of a woman in a family

Austen uses relationships to demonstrate the role of a daughter in a 19th century society. Isabella and Emma are the main characters used to convey those characteristics. Coming from the same “respectable” family the two sisters have similar ideas about being submissive to their father and prepared to “sit with him” even if it is against their wishes. This shows that daughters in the society respect the expectations of their father. However there is a clear distinction between Emma’s and Isabella’s attitude. Numerous times the reader witnesses how Emma manages to manipulate the situation to her own advantage and persuade her father to allow her to achieve what she wants. This is due to a feminised figure of a father, who had to develop female qualities after the loss of Emma’s mother, this becoming softer and easy to manipulate. When Emma wants to attend a ball and Mr Woodhouse disapproves, she persuades him that it is essential for her to go in order to please the others, as that is what they “expect” of her. It is then that she is allowed to attend. Through this incident in the relationship, Austen demonstrates how important it was to sustain one’s social image even if it required defying personal rules.

In order to explore the duties and expectations of a mother and a wife Austen depicts Isabella and Mrs Elton. Isabella is presented throughout the book as the perfect material for a mother as well as a wife. Her relationship with Mr John Knightley emphasises that a wife, just like a daughter, should to submit to a man. Isabella is “good tempered” and tries to calm the situation with her typical phrase “every time my love”. This emphasises the importance of a woman to accepting that she has submit to her husband fully. This helps to establish on what basis the community in Highbury functioned.  Mrs Elton is the character used to present the unwanted qualities in a wife as well as a woman and behaves in a manner which was disapproved of in Highbury. Emma considers her not to have “elegance” be too loud and self indulged. She is “an addition” the Highbury and from the beginning she is presented as an outsider. This helps the audience to understand how tightly family relationships were formed in Highbury.

Through the depiction of the family life and its structure, Austen critiques class segregation. Emma and her father are considered as one of the respectable families in Highbury. They are more “fortunate” than others due to their inherited affluenc.e

In her own eyes, Emma regards herself and her father to be superior members of the Highbury community This is evident in her considering the Martins to be “coarse and unpolished”, whereas members of the society like Mrs Bates she regards as “bad acquaintances”.  The fact that Emma and her father believe it is their duty to help Mrs Bates and support her financially, by sending her food, show that some members of the gentry felt pity for those who were not as “fortunate” as them.

Another family relationship within the book which helps to explore society’s limitations caused by class is that one of Jane Fairfax and the Bates. Jane, being an orphan, was brought up and educated by the family of Coles, and later on the book looked after by Mrs Bates. The fact that Jane lives with her aunt shows that a young woman could not live on her own and had to be dependent on her family. Although she has had an upper class education and represents desirable qualities of a “really accomplished young woman” the reader learns that she has not the same opportunities in life as Emma or even Harriet. This is shown through the party at the Coles where Jane was only invited to the evening once Harriet had turned down her place. Family roots and social connections are valued in the society of Highbury. Depending origin and social background determines your status as well as the future possibilities in life.  This shows that although Jane’s education was superior to Harriet, it did not change her status in the society which was determined by personal acquaintances.

Austen also emphasises the importance of remaining healthy in the society. This is explored through Mr Woodhouse, Bates and Knightleys. Mrs Bates forbids Jane to go out on her own and constantly is worried about “her poor health”, showing that it was essential for a young woman to remain in good physical shape.  The relationship between Mrs Bates and Jane also demonstrates the lack of freedom of young woman’s life, as Jane can never make her own decisions and has to always rely on her aunt. Through other family relationships Austen demonstrates the difference in attitudes towards health. Mr Woodhouse comments on Mr John Knightley to being “too rough with the children” whereas John considers it good that his children are “active and hardy”. The variety in their opinions could have been determined by the generation difference, Mr Woodhouse being older is constantly preoccupied with his “illnesses” and John Knightley being younger and more active. The division in their attitudes towards health also show…..

In the Victorian period it was the family that was the core of social and even political life. Although even within a further family an individual had expectations that they had to fulfil.  This is demonstrated through the character of Frank Churchill. He is expected to visit Mrs Weston in order to show his respect to his father’s wife. This also helps to create the idea how important it was to tighten family relationships. Paying honour and praise was considered as essential in order to keep good family contacts. Austen comments that the society expected a man to always “do his duty” Had Frank not gone to see Mrs Weston he would have been considered as discourteous and disrespectful.

In conclusion Austen uses various family relationships to create a full picture of Highbury society. Austen creates ideals of a family which were sought after in that society, like that marriage between Isabella and John, demonstrating that happiness depended on family and connections. The use of relationships in the novel also helps the audience to realise the importance of connections and clear class boundaries which existed at the time.