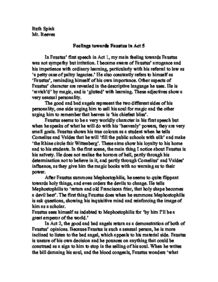 Feelings towards Faustus in Act 5

Ruth Spink Mr. Reeves Feelings towards Faustus in Act 5 In Faustus' first speech in Act 1, my main feeling towards Faustus was not sympathy but irritation. I became aware of Faustus' arrogance and his impatience with ordinary learning, particularly with his referral to law as 'a petty case of paltry legacies.' He also constantly refers to himself as 'Faustus', reminding himself of his own importance. Other aspects of Faustus' character are revealed in the descriptive language he uses. He is 'ravish'd' by magic, and is 'glutted' with learning. These adjectives show a very sensual personality. The good and bad angels represent the two different sides of his personality, one side urging him to sell his soul for magic and the other urging him to remember that heaven is 'his chiefest bliss'. Faustus seems to be a very worldly character in his first speech but when he speaks of what he will do with his 'heavenly' powers, they are very small goals. ...read more.

Because Faustus is such a sensual person, he is more inclined to listen to the bad angel, which appeals to his material side. Faustus is unsure of his own decision and he pounces on anything that could be construed as a sign to him to stop in the selling of his soul. When he writes the bill damning his soul, and the blood congeals, Faustus wonders 'what might the staying of my blood portend?' Faustus questions Mephostophilis, who cleverly sidesteps each question and appeals to Faustus' sensual side by showing him a visual display of dancing devils and fireworks. Faustus is keen to believe in heaven but not in h**l. Even though Faustus called to h**l, and Mephostophilis is standing in front him as proof of the existence of h**l, he does not truly believe his soul will be damned. He dismisses h**l as 'trifles and mere old wives tales.' Faustus' sensual side, suggested earlier in the play by his language, is openly admitted in Act 2 when Faustus tells Mephopstophilis he is 'wanton and lascivious and cannot live without a wife.' ...read more.

At first he welcomes the old man as 'friend' but then later asks Mephostophilis to 'torment..that base and aged man'. Even in his final hours, Faustus still turns to material and beautiful things. He conjures Helen of Troy and pleads with her to save him, which is ironic as she is conjured, and a devil. Faustus' pleading becomes increasingly desperate and he says he would give up everything for being saved. Even 'that I had never seen Wittenberg, never read book'. His very last offer to Lucifer is 'I will burn my books!' This shows his desperation as this would be the ultimate sacrifice for Faustus, the ultimate scholar. Throughout the play, my sympathy for Faustus varies in intensity. I feel most sympathy in the final scene, when he wishes to repent, but cannot. However, it is difficult to conjure up much sympathy for Faustus as he brought his fate on himself. He had opportunities to redeem himself and rejected them time and time again. He cannot be classed as a tragic hero as he has too many faults. Faustus is arrogant, vain, materialistic, and na�ve. All these characteristics eventually lead to his downfall. ...read more.