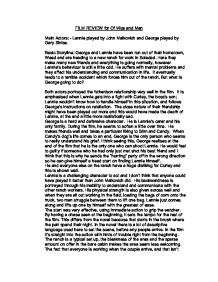 Film review for Of Mice and Men - Main Actors: - Lennie played by John Malkovich and George played by Gary Sinise.

FILM REVIEW for Of Mice and Men Main Actors: - Lennie played by John Malkovich and George played by Gary Sinise. Basic Storyline: George and Lennie have been run out of their hometown, Weed and are heading to a new ranch for work in Soledad. Here they make many new friends and everything is going normally, however Lennie's behaviour is still a little odd. He suffers with mental problems and they affect his understanding and communication in life. It eventually leads to a terrible accident which forces him out of the ranch, But what is George going to do? Both actors portrayed the father/son relationship very well in the film. It is emphasised when Lennie gets into a fight with Curley, the boss's son; Lennie wouldn't know how to handle himself in this situation, and follows George's instructions on retaliation. ...read more.

When Candy's dog's life comes to an end, George is the only person who seems to really understand his grief. I think seeing this, George realises at the end of the film that he is the only one who can shoot Lennie. He would feel to guilty if someone who he had only just met shot his best friend and I think that this is why he sends the "hunting" party off in the wrong direction so he can give himself a head start on finding Lennie himself. He and everyone else on the ranch have a huge disliking for Curley and this is shown well. Lennie is a challenging character to act and I don't think that anyone could have played it better than John Malkovich did. ...read more.

By having a chase seen at the beginning, it sets the tempo for the rest of the film. This differs from the novel because that starts in the brush where the pair spend their night. In the novel there is a lot of descriptive language used here to set the scene, before any people arrive. In the film it's straight into the action with hints of trouble right from the beginning. The ranch is a typical set up, the bleakness of the area and the sparse amount on offer in the bare cabin makes the area seem less welcoming. The fact that everyone is working when the couple arrive, and that isn't many people around to greet them also gives an unwelcoming atmosphere. However contrasted with the work scenes later on makes it seem more realistic. There are constant shots of sunshine, golden corn and happy people working ...read more.