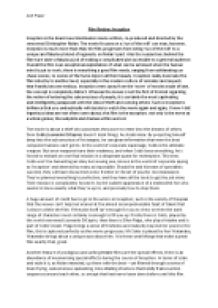 ﻿Josh Fraser Film Review: Inception Inception is the brand new blockbuster movie written, co-produced and directed by the renowned Christopher Nolan. The movie focuses on a ?run of the mill? con man; however, Inception is much more than that, the film progresses from being ?run of the mill? to a unique and fabulous blend of ingenuity on Nolan?s part. Also the researchers behind the film have done a fabulous job of making a complicated plot accessible to a general audience. Overall the film is an exceptional exploitation of what can be achieved when the human mind is put to work; there is everything a good film needs, ranging from exhilarating car chase scenes, to scenes of the Swiss Alps in all their beauty. Inception really does take the film industry to another level, especially in the modern culture of remakes and sequels that frankly become tedious. ...read more.

But even weapons have their weakness, and when Cobb loses everything, he's forced to embark on one final mission in a desperate quest for redemption. This time, Cobb won't be harvesting an idea, but sowing one, known in the world of corporate spying as ?Inception? and deemed by many as impossible. Should he and his team of specialists succeed, they will have discovered a new frontier in the art of psychic reconnaissance. They've planned everything to perfection, and they have all the tools to get the job done. Their mission is complicated, however, by the sudden appearance of a malevolent foe who seems to know exactly what they're up to, and precisely how to stop them. A huge amount of credit has to go to the actors in Inception; such is the variety of thespian that the viewer can?t help but marvel at the almost incomprehensible feast of talent that is shown within the film. ...read more.

The end product is truly outstanding, as we get an explosive Swiss mountain vault storming within a zero gravity scramble within a vehicle crunching chase. In effect, the set pieces are simultaneous, which is mind boggling yet brilliant as while he at times astonishes through the necessary complex editing, Nolan never corrupts his multiverse?s internal logic. Inception is so distinctive it is hard to possibly not enjoy watching it, scrutinous attention to detail is prevalent throughout the film, it is this that makes inception a huge success as a whole, and I command everyone that has not seen it to do so. Although at times confusing, the film can be figured out, although it is granted that your mind will feel like it has been through a strenuous workout when the film comes to an end. This is partly the reason that makes Inception one of, if not the, greatest film ever made. ...read more.