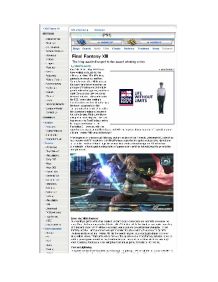 Final Fantasy XIII - First Draft The long awaited sequel to the award winning series By Stuart Laverty May 28th 2008 - Rapid RPG fans have waited anxiously for the critically acclaimed Final Fantasy games to advance to their Next Generation consoles. Nintendo and Microsoft fans have never had the pleasure of hosting one of the truly great Final Fantasy games, and once again Sony exclusively welcomes the next inclusion in the series onto the PS3. Years after making a historic debut over two decades ago, the boom in popularity of the fantasy-adventure series has led to the Japanese creation to become a household name. Finally, months of anticipation have elapsed - the wait has ended - as Final Fantasy makes its long-awaited debut to the Playstation 3. However, with the apprehension based around its release, and with the unprecedented success of its predecessors, did Final Fantasy XIII live up to the hype? What began as a miniscule cult following back in the days of the Nintendo Entertainment System has now become an RPG revolution, with Final Fantasy capturing the spirits of obsessive internet and critics alike - and has helped forge the series into a worldwide extravaganza. What this has culminated in, is the longest running series of games ever - and has helped bring this game to the next generation. ...read more.

now slight bruises and injuries are now visible, as your characters move slowly if they've been damaged, and you would require healing. Not only does it add realism, but it just makes sense, and how its taken the designers twenty years to figure it out is beyond me. But when you get into the FMV sequences, you seriously cannot fathom just how good the game looks - and that is something you have to experience. It's really like sitting in a cinema, by yourself, watching some classic fantasy film such as Lord of the Rings, and really experiencing it all first hand. With every silver lining comes a dark cloud While Final Fantasy XIII will be hotly debated as one of the best games in the Final Fantasy series, it poses some serious questions about its longevity. Playing the game all the way through the first time is an absolutely amazing experience, and one that any RPG fan needs to embark on, yet when you put it in after seeing the ending and start up again, it doesn't hold up. Having waited another week before playing again, it still didn't hold a candle to the first time playing it. Critics who have already completed the game after just two weeks of non-stop action have all agreed that the story is far too long, with the game taking over 80 hours of playtime to complete - and that's not including sidequests! ...read more.

Furthermore, the piece would then go on to describe the gameplay, and storyline - clearly underlying the positives of the game, before heading towards the negatives. Subsequently, my text came to a solid conclusion at the end, and it all relates clearly to the style that my model originally had. The grammar used also had to replicate that of my model. Slowly, as the coursework has progressed, the grammatical features have expanded to include more advanced work such as semi-colons, to make the article seem more professional, and use more technical language. Similarly, the types of sentences used have also been chosen specifically. For example, declarative statements have been used throughout, since the article is informative but also to entertain. On the other hand, several interrogative sentences have been used in order to make the reader interact more with the article. The sentences also had to mostly be either compound, or contain an extra subordinate clause, because I wanted to make it more technical, and also emulate the model's sentence structure. Moreover, I had to make good use of pragmatics, as I had to assume that my reader was interested in the Final Fantasy series. This can be observed when mentions the previous characters who have created a legacy in Final Fantasy, such as "Aeris" and "Balthier". These assumptions help my text flow, without heading into any unnecessary words used to describe exactly what my article is talking about. ...read more.