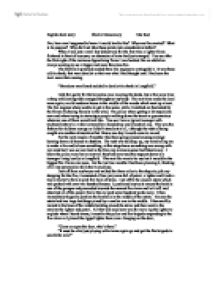 Fire, how was I supposed to know it would lead to this?

English short story Charlie Mcsweeney Mrs Kurt Fire, how was I supposed to know it would lead to this? Why was fire created? What is its purpose? Why did I not take these points into consideration before? When I was just a small boy (about ten) for the first time a lighter flame flickered in front of my eyes, an obsession of mine had just emerged. You see after the first sight of the luminous hypnotising flame I was hooked like an addiction always wanting to see a bigger and more ferocious fire. The first fire I spawned needed three fire engines to extinguish it. It was these old tin sheds, that were derelict or that was what I had thought until I had seen the local news that evening, "Homeless man found scolded in derelict tin sheds in Longfield." I did feel guilty for the homeless man vacating the sheds, but at the same time a sharp exhilarating rush emerged throughout my body. The next time made the local news again, an old rundown house in the middle of the woods which went up a treat. ...read more.

This next fire was to be my last it would be the biggest fire I have ever seen. For the last two months I had been planning it, thinking of all my pyromaniac skills that I could use. I set off from my house and walked the three miles to the shops to pick my shopping for the fire; it consisted of two jerry cans full of petrol, a lighter and I took a trip to Glover's farm to pick five bails of straw. I set off to the council estate which was packed with over two hundred houses. I positioned my tools around the back in one of the garages and proceeded towards the nearest fire alarm and let it off, and observed all of the people flee to the car park some hundred yards away. I then immediately began to position the hay bails in the middle of the estate. You see the estate had two large buildings joined by a smaller one in the middle. I then swiftly moved to the base of the middle building placed the straw and then went to the retrieve the lighter and petrol. ...read more.

At this point staring death right in the eyes I realised there was no rush or urge to do it again but a desire to live my life as a usual sane person again not a pyromaniac and not end my life at sixteen. The fire was now two floors below me I could feel the heat through the roof. My actions always have seemed to go before my mind so before I knew it I was in mid air on my way down to earth. I passed through the flames out the window I got slightly scolded; as I hit the floor with a horrifying thud and no sense of feeling in my legs feeling completely paralysed. Whilst I was trying to crawl away I was spotted by one of the policemen, "Lads I've found him. He's the one who started it I saw him through the window." I wasn't really left with a choice to plead my innocence seeing as one of the residents saw me set the alarm off. So here I am now sitting in juvenile prison saying to myself, "Fire, how was I supposed to know it would lead to this? Why was fire created? What was its purpose?" ...read more.