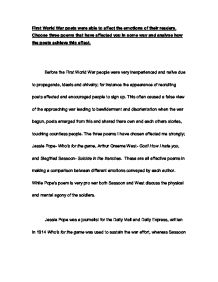 First World War poets were able to affect the emotions of their readers. Choose three poems that have affected you in some way and analyse how the poets achieve this effect.

First World War poets were able to affect the emotions of their readers. Choose three poems that have affected you in some way and analyse how the poets achieve this effect. Before the First World War people were very inexperienced and na�ve due to propaganda, ideals and chivalry; for instance the appearance of recruiting poets affected and encouraged people to sign up. This often caused a false view of the approaching war leading to bewilderment and disorientation when the war begun, poets emerged from this and shared there own and each others stories, touching countless people. The three poems I have chosen affected me strongly; Jessie Pope- Who's for the game, Arthur Graeme West- God! How I hate you, and Siegfried Sassoon- Suicide in the trenches. These are all effective poems in making a comparison between different emotions conveyed by each author. While Pope's poem is very pro war both Sassoon and West discuss the physical and mental agony of the soldiers. Jessie Pope was a journalist for the Daily Mail and Daily Express, written in 1914 Who's for the game was used to sustain the war effort, whereas Sassoon and West were both fighting soldiers. ...read more.

Alternatively I think the smooth pace suits the content as Sassoon is conveying the repetition and normality of war as he has been there for so long. God! How I hate you uses quotations, hyphens and commas to form an irregular pace to the poem. Elipses and enjambment are frequently used to illustrate the apprehension and uncertainty in addressing Huge Freston's sonnet. The elipses provide an atmosphere of wonder and create suspense 'His Heaven, all is right In the best possible of worlds'. Furthermore I think the pace suits the content of the poem well and affects the reader's emotion by creating anxiety additionally the rhythm matches the content as both convey a cynical attitude. Each poem creates a certain mood by the use of different types of language. Firstly Pope uses jingoistic, common persuasive language in order to appeal to the working class and affect their emotions; she achieves this by using direct involvement with the reader. Secondly Sassoon also uses expressive common language to provide contrast with the subject matter. Finally, West uses eloquent language to match the subject matter which is very effective in creating a grave atmosphere and affecting the reader. ...read more.

West second way of answering the sonnet is his use of his dull bare colloquial tone, 'Where blood's the only coloured thing' and 'Spattered all his body on the parados...' His colloquialism provides a blunt tone to the poem adding to the effect and causing a depressive mood. In his horrific details he includes similes and emotive language for emphasis, for instance 'Smashed like an eggshell and the warm grey brain spattered'; his language and imagery adds to the detail, establishing a greater effect of horror. The last line 'Yet still God's in His Heaven, all is right In the best possible of worlds...' (This is based on the French novel Candide by Voltaire. His character Pangloss is an optimist.) This sarcastic ending emphasizes misery of war. In conclusion God! How I hate you is my favourite poem as West's emotions come out of the writing and straight to my heart. I find Pope's poem an admirable representation of the distressing approach cultured on the home front. Sassoon shows is an excellent example of poetry conveying the reality of the war. Each poem has affected my emotions abundantly and made me strongly think about what people went through before and during the war. ...read more.