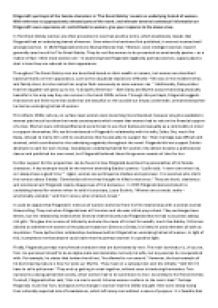 Fitzgeralds portrayal of the female characters in The Great Gatsby reveals an underlying hatred of women. With reference to appropriately selected parts of the novel, and relevant external contextual information on Fitzgeralds own attitude to women, give your response to the above view.

Transfer-Encoding: chunked ﻿Fitzgerald?s portrayal of the female characters in ?The Great Gatsby? reveals an underlying hatred of women. With reference to appropriately selected parts of the novel, and relevant external contextual information on Fitzgerald?s own experience of, and attitude to women, give your response to the above view. In The Great Gatsby women are often presented in less than positive terms, which doubtlessly reveals that Fitzgerald had an underlying hatred of women. Even when the book was first published, it was not received well amongst women. In 1925 Fitzgerald wrote to Marya Mannes that, ?Women, even intelligent women, haven?t generally cared much for The Great Gatsby. They do not like women to be presented as emotionally passive ? as a matter of fact I think most women are.? In examining how Fitzgerald negatively portrays women, a good place to start is how they are reduced to their appearance. Throughout The Great Gatsby men are described based on their wealth or careers, but women are described based primarily on their appearance, such as the sexualised depictions of Myrtle: ?She was in the middle thirties, and faintly stout, but she carried her surplus flesh sensuously as some women can. ...read more.

The main dominator is, of course, Tom. He perceives himself to be an alpha-male and dominates not only his wife, but any woman he is acquainted with. For example, he states that Jordan should not, ?be allowed to run around.? However, the best example of his domineering nature is how he ?picks up? Myrtle. They meet on a subway train and she initially, ?told him I'd have to call a policeman.? They end up getting in a taxi together, without even introducing themselves. Tom represents a dying patriarchal society, when women had to be submissive to men. According to his friend Andrew Turnbull, Fitzgerald often said, ?this is a man?s world. All wise women conform to the man?s lead.? Perhaps Fitzgerald, much like Tom, dismayed at the change in women that the 1920s brought. Men were slowly losing their culturally expected role of breadwinner, which left many men without a sense of purpose. It is feasible that Fitzgerald may have felt his masculinity and power was being usurped by the many powerful women in his life, which led to an underlying hatred of women. Those that oppose my view claim that Fitzgerald did not have an underlying hatred of women. ...read more.

Finally, it could be argued that Fitzgerald?s underlying hatred wasn?t only directed at women; it was directed at everyone, male and female alike. It could even be said that Nick is more critical of the men than the women. In chapter one he states he was, "Disgusted with everyone, and everything. Only one man was exempt from my disgust." The women aren?t portrayed negatively simply because of their gender, it is because of their frivolous lifestyles and selfish personalities. Fitzgerald was somewhat of a hypocrite; he resented 1920s culture while at the same time embodying everything he despised. His own excessive lifestyle is similar to Gatsby?s. He was part of the ?lost generation?, the young men who went to war and returned shell-shocked and without vital employment skills. Thus women are not to blame for his problems, but 1920s society as a whole. To conclude, after careful consideration we determine that Fitzgerald certainly had a disdain for women. It may be exaggerating to call it hatred, but his rough past with women twisted Fitzgerald?s portrayal of them. We see this reflected throughout the novel, and in Fitzgerald?s own quotes. The opposing arguments have some merit but ultimately they fail to realise the true implications and context of The Great Gatsby. ...read more.