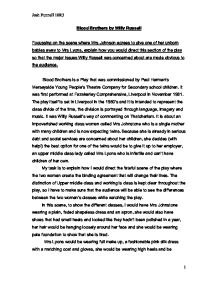 Focussing on the scene where Mrs Johnson agrees to give one of her unborn babies away to Mrs Lyons, explain how you would direct this section of the play so that the major issues Willy Russell was concerned about are made obvious to the audience.

Blood Brothers by Willy Russell Focussing on the scene where Mrs Johnson agrees to give one of her unborn babies away to Mrs Lyons, explain how you would direct this section of the play so that the major issues Willy Russell was concerned about are made obvious to the audience. Blood Brothers is a Play that was commissioned by Paul Harman's Merseyside Young People's Theatre Company for Secondary school children. It was first performed at Fazakerley Comprehensive, Liverpool in November 1981. The play itself is set in Liverpool in the 1960's and it is intended to represent the class divide of the time, the division is portrayed through language, imagery and music. It was Willy Russell's way of commenting on Thatcherism. It is about an impoverished working class woman called Mrs Johnstone who is a single mother with many children and is now expecting twins. Because she is already in serious debt and social services are concerned about her children, she decides (with help!) the best option for one of the twins would be to give it up to her employer, an upper middle class lady called Mrs Lyons who is infertile and can't have children of her own. My task is to explain how I would direct the fateful scene of the play where the two women create the binding agreement that will change their lives. The distinction of Upper middle class and working is class is kept clear throughout the play, so I have to make sure that the audience will be able to see the differences between the two women's classes while watching the play. In this scene, to show the different classes, I would have Mrs Johnstone wearing a plain, faded shapeless dress and an apron, she would also have shoes that had small heels and looked like they hadn't been polished in a year, her hair would be hanging loosely around her face and she would be wearing pale foundation to show that she is tired. ...read more.

She would be standing in a slouched stance; her facial expression would be resigned as if she knows that she has lost one of her babies already. She could then sit down on the inhospitable sofa; this would then mean Mrs Lyons was higher than her, like she was overpowering her. I want the audience to now look at Mrs Johnstone and think she is the one that they should be feeling sorry for, as she is being tyrannized by Mrs Lyons. I would then have Mrs Lyons walk up to Mrs Johnstone and stand over her to show to the audience who is in control, as Mrs Lyons can see that Mrs Johnstone is close to breaking point she goes for her final gambit and tries to threaten her employee with the words: "Already you're being threatened by the Welfare people. Mrs Johnstone, with two more children how can you possibly avoid some of them being into care". The lighting during this dialogue would be brighter on Mrs Lyons and dimmer on Mrs Johnstone, I would to this to emphasise this vision of power that I have created already for Mrs Lyons. Mrs Lyons would then stare directly at Mrs Johnstone's face, just as the lights turned to a dark orange sympathetic colour as if to make Mrs Johnstone more agreeable. When she says "Are y' ... are y' that desperate to have a baby?", because she has just let herself into the biggest mistake of the play there would be a red light on the stage to symbolise danger. In the next part of the scene there is a lot of singing involved, the good thing about music in this play is that it can create more emotions than lighting and bodily expressions can, so for the first lines "Each day I look out from this window, I see him with his friends, I hear him call," I would have Mrs Lyons walk up to the window and start to sing, there ...read more.

In a previous scene the audience would have seen that Mrs Johnstone is a very superstitious woman, so they would know that if she tried to break this binding agreement she would believe that she would condemned to the depths of hell. To establish this both women would freeze and a dark red light would illuminate the stage. The narrator would enter the same way he entered before but this time every time he took a footstep a loud heartbeat would follow him. The heartbeat signifies fear and suggests tragedy to the audience. The heartbeat would get louder every time he took a step, he would walk up to Mrs Lyons, take the bible from her hand and turn to a random page, he would then say his lines. The audience would now feel a considerable amount of disrespect for Mrs Lyons because they now know she is not the woman that she has portrayed herself to be. The narrator would then close the book, put it back in Mrs Lyons hands and go and sit on the sofa as if to create the effect that he is omnipresent. Mrs Lyons would put the bible back on the table. She would then pick up her bag and leave. Mrs Johnstone would be standing still looking at the floor with a sorrowful look on her face, she would freeze and the narrator would stand up again with intense heartbeats raging in the background. The scene would finish with the narrator ending his lines, walking up to the bible opening it to a random page and then walking off the stage. I think I have expressed the importance of this scene within the matrix of the play. It is the first time we see both of the women's true personalities. It is the first time the audience has been encouraged to understand why Mrs Johnstone gave one of her babies to Mrs Lyons. I have shown the differences in social class and the way the whole play links to Willy Russell's image of Thatcherism and the recession. ?? ?? ?? ?? Josh Funnell 10R3 1 ...read more.