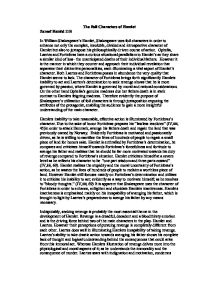 The Foil Characters of Hamlet Zareef Hamid 11B In William Shakespeare's Hamlet, Shakespeare uses foil characters in order to enhance not only the complex, insoluble, divided and introspective character of Hamlet but also to juxtapose his philosophically driven course of action. Ophelia, Laertes and Fortinbras have a curious situational parallelism to Hamlet's as they share a similar kind of loss- the unanticipated deaths of their individual fathers. However it is the manner in which they counter and approach their individual revelation that separates their distinctive personalities, each illuminating a vital aspect of Hamlet's character. Both Laertes and Fortinbras posses in abundance the very quality that Hamlet seems to lack. The character of Fortinbras brings forth significantly Hamlets inability to act and Laertes's detemination to seek revenge shows that he is more governed by passion, where Hamlet is governed by moral and rational considerations. On the other hand Ophelia's genuine madness due her fathers death is in stark contrast to Hamlets feigning madness. ...read more.

Indisputably, seeking revenge is probably the most essential theme in the development of Hamlet. Revenge is a dreadful, decadent and a bloodthirsty emotion and is the driving force behind two of the main characters in the play- Hamlet and Laertes. However their perceptions of pursuing revenge is completely different from each other. Laertes does well in illuminating Hamlets incapability of taking revenge. Laertes's ability to take drastic action towards avenging his father shows his complete lack of thought and logical understanding behind the consequences that could arise from this immoral act. Whereas Hamlets illustration of revenge delves more into the physiological and moral aspects of it; as he understands the immorality and the consequence of murder. Laertes sears with indignation and motivation, condemns "conscience and grace to the profoundest pit" (IV,7,120) as he believes that "revenge should have no bounds", and will even go to the extent of slashing Hamlets throat within church walls. ...read more.

Hamlet is essentially "not in madness/But mad in craft." (III,ii,20).Hamlet cleverly utilizes his antic disposition to clear out any suspicions, towards his revenge. He feigns madness in the 'nunnery scene' when he suspects someone is overhearing the conversation between him and Ophelia. Thus proving Hamlet's intellect and utilization of Hamlets madness as a tool. Whereas Ophelia's madness is instigated from her inability to handle the pressure of losing her father, thus her world is completely shattered and descends to madness; leading to her inevitable death. Through juxtaposing Hamlet's feign madness to Ophelia's actual insanity, Shakespeare is able to show prominence on Hamlet's intellectual and complex characteristics. Shakespeare eloquently portrays and brings to light Hamlets attributes through contrasting minor characters. His use of foil characters enables the audience to emphasize more on the protagonist's circumstance and characteristics in contrast to the minor characters. Shakespeare has dealt with his characters not in the conventional sense but in a more reality based fashion, which has evidently helped his audience to understand the parallelism and differences between each minor character to the protagonist. ...read more.