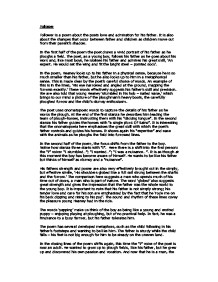 Follower is a poem about the poets love and admiration for his father. It is also about the changes that occur between father and children as children move out from their parent's shadow.

Follower Follower is a poem about the poets love and admiration for his father. It is also about the changes that occur between father and children as children move out from their parent's shadow. In the first half of the poem the poet draws a vivid portrait of his father as he ploughs a field. The poet, as a young boy, follows his father as he goes about his work and, like most boys, he idolises his father and admires his great skill, 'An expert. He would set the wing and fit the bright steel - pointed sock'. In the poem, Heaney looks up to his father in a physical sense, because he is so much smaller than his father, but he also looks up to him in a metaphorical sense. This is made clear by the poet's careful choice of words. An example of this is in the lines, 'His eye narrowed and angled at the ground, mapping the furrows exactly.' These words effectively suggests his father's skill and precision. We are also told that young Heaney 'stumbled in his hob - nailed wake,' which brings to our mind a picture of the ploughman's heavy boots, the carefully ploughed furrow and the child's clumsy enthusiasm. ...read more.

Just as the boy once tripped and fell in his father's wake, now, that he has grown up, it is his father who "stumbles" behind him. The roles have been reversed between the two men and now it is the father who follows his son. By the end of the poem we are left with the image of the stumbling of old age in sharp contrast with the stumbling of childhood. Even though the word 'love' is never used in the poem, it is obviously the word that best describes the basis of the relationship existing between Heaney and his father. The poem is very much a personal experience, but it has a much wider significance relating to any kind of hero -worship by a 'follower'. Now that he is himself an adult. Heaney acknowledges that the father he hero-worshipped as a young boy has grown old and needs as much tolerance and patience as he himself once showed his son. Death of a naturalist This poem is a fertile mixture of imagery, sounds and an impression created by nature on a person's mind. Heaney sensualizes an outstanding feel of the physical wonders of nature. ...read more.

The teacher, Mrs Walls uses childish language, such as 'daddy' and 'mammy'. The poet uses this language to convey his innocence at that age. In the second stanza, it is obvious by the change of tone and language, such as 'gross', 'slime; and 'angry', that the child is perhaps moving into adolescence and has become less oblivious and innocent to the world around him. The naturalist in him is dead. "Fattening dots burst" shows growth and reproduction. Heaney's school teacher, Ms Walls, is hiding the reality of reproduction from the young children as they are not yet ready to accept the reality of the situation. He is disgusted at the thought of reproduction because he sees things through the surrealistic eyes of a child because of the stage he is at. He isn't ready to accept s*x. He can't rationalise. Puberty makes him feel guilty. In the end he runs away, "I sickened, turned and ran", which shows that he has not fully grown up. In this poem, Heaney uses terms we do not expect to see in poetry, and presents nature as the very opposite of beautiful. Heaney shows how children are very ingenuous and na�ve and see the world as being very pure and wholesome just as it is in their imagination. He also shows that there is a transformation from childhood to adult hood. ...read more.