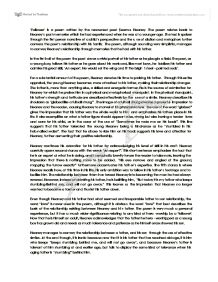 Follower is a poem written by the renowned poet Seamus Heaney. The poem relates back to Heaneys past memories which he had experienced when he was at a younger age.

'Follower' is a poem written by the renowned poet Seamus Heaney. The poem relates back to Heaney's past memories which he had experienced when he was at a younger age. The text is spoken through the first person narrative of a child's perspective and the use of diction and metaphors further conveys the poet's relationship with his family. The poem, although sounding very simplistic, manages to convey Heaney's relationship through memories that he had with his father. In the first half of the poem the poet draws a vivid portrait of his father as he ploughs a field. The poet, as a young boy, follows his father as he goes about his work and, like most boys, he idolizes his father and admires his great skill, 'An expert. ...read more.

It also exemplifies on what a father figure should appear to be, strong but also having a tender love and care for his child, as in the case of the use of "Sometimes he rode me on his back". This line suggests that his father tolerated the young Heaney being a hindrance as he "stumbled in his hob-nailed wake". The fact that he chose to ride him on his back suggests his love and affection for Heaney, further cementing their positive relationship. Heaney continues his adoration for his father by acknowledging his level of skill in his craft. Heaney carefully opens second stanza with the words "An expert". This short sentence emphasizes the fact that he is an expert at what he is doing, and its emphatic brevity forces the reader to take note, leaving the impression that there is nothing more to be added. ...read more.

The poem is very much a personal experience, but it has a much wider significance relating to any kind of hero-worship by a 'follower'. Now that he is himself an adult, Heaney acknowledges that the father he hero-worshipped as a young boy has grown old and needs as much tolerance and patience as he himself once showed his son. Heaney manages to convey the relationship between a father, and his son through the use of effective similes. At the end though, it is ironic because now that it is his father that has reached old age, it is him who keeps "keeps stumbling behind me, and will not go away", and because Heaney's father is tolerant of him stumbling at and earlier age, but fails to display the same kind of tolerance when his aging father is "stumbling" behind him. ?? ?? ?? ?? ...read more.

The response given here is in receipt of a question that asks candidates about the presentation of Heaney's childhood in his poem 'Follower'. The candidate makes an appropriate on the creation of the theme of childhood and recognises many of ...

The response given here is in receipt of a question that asks candidates about the presentation of Heaney's childhood in his poem 'Follower'. The candidate makes an appropriate on the creation of the theme of childhood and recognises many of the literal and not-so-literal motifs used, such as the idea of a follow being subordinate to someone they admire and the role reversal as Heaney matures and his father becomes reliant on him. There is a good level of focus obvious throughout the essay, though I would like to see a greater consideration towards the contextual factors of the poem - why did Heaney feel obliged to look after his father in his old age (other than kindness)? What was the expected norm for a son to do when growing up in a predominantly agricultural environment when the father became too old to work? Why did Heaney rebel against this? All these question are left unanswered and the focus is dissipated more on the analysis of theme; though not something the candidate can be penalised for, it makes for an unbalanced essay that does not focus on all the necessary requirements that the question carries.

The Level of Analysis shown by this candidate is wholly indicative a strong B grade at A Level. It is to be expected that there is good evidence of understanding and comprehension - of which there is - and also an appreciation of the social and historical factors that influenced the writing of the poem, as well as the autobiographical nature of it. This latter quality is not as explicitly well-made as the first. The analysis is good but is spread too thinly, with the candidate trying to comment on as much as they appear to remember from the lessons they learnt this poem in, and a lot of it is therefore very systematic. Again, this is no punishable offence at all but it does limit the originality and innovation of a candidate's answer. It's clichÃƒÂ©d but there is no right or wrong here - unless you contradict the poetic/authorial intentions completely, your own subjective views are perfectly respectable.
I like the comments made identifying the metaphor of Heaney's father following him in his old age, pleading for Heaney to look after the farm as his father once did, and Heaney now look upon his father as an irritation, just as his father may have done when Heaney's clumsiness as a young boy may have irritated him. This is an example of the implicit statements made about the context. To improve, the candidate need only make the link explicit by stating something like "It is with this [context] in mind that Heaney [use this poetic devices, or writes this and that, etc.]".

The Quality of Written Communication is good. The language used is appropriate for the analysis of the poem with the adjective used in the Explanation segment of the PEE (Point, Evidence & Explanation) formula carrying sufficient weight to give the impression the candidate is aware of the emotive impact of the poem. To improve, the candidate might want to consider adopting a far greater range of more complex punctuation points, such as using colon and semi-colons in order to diversify the lengths of sentences and create a thoroughly interesting response that give the examiner the impression you are confident with a more developed use of English.