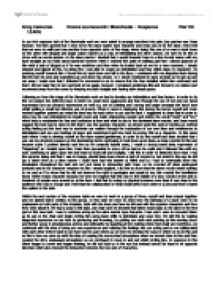 Following on from this stage of the Slavetrade work we had to develop our intimidation and fear factors. In order to do this we explore the different ways in which we could show aggression and fear

Greg Cameron Drama coursework: Slavetrade - Response Mar 06 11AMc In our first response task of the Slavetrade work we were asked to arrange ourselves into pairs (my partner was Dean Parmar). We then agreed that I were to be the slave master type character and Dean was to be the slave. Were told that we were to walk past one another from opposite sides of the stage, when doing this one of us was to look down on the other with disgust and anger (slave master) as a way of intimidating the other (slave), we were to do this in mime with no words spoken. As the slave master I decided that I would towards Dean in a slow formal manor with my back straight an my head raised upwards however when I reached the point of walking past him I almost glanced at him with a look of disgust as if he was worthless and then when he looked back at me for a mere moment, I simply stopped and glared at him, by doing this I was able to create an intimidation and fear within dean ('s character). By pressing myself towards him I forced him to back down and fall to the floor, I continued with my disgusted look staring directly into his eyes and examining up and down his person. As I slowly continued to stare at dean as he got up and ran away I made sure that I followed his movement so as to ensure that the fear installed within him continued and that I did not want ...read more.

We had a prop in this task, one chair and we decided that Glenn would play as the slave in the first part of this new task. I was to continue acting as the salve master type character. Dean and I were to surround Glenn as he sat on the chair and begin circling him using basic skills to intimidate and scare him. We did this by making disgusted expression on our face by grimacing and frowning, by gritting our teeth and pointing at him moving closer and further away in simultaneous actions and ultimately by laughing at him making Glenn feel small and worthless, we continued with the idea of using our own experiences and relaying the feelings into our acting and so we collaborated with each other before hand to see how best to scare Glenn as we were to develop the ways in which we to do this and so this is how we came up with the idea of creating the encroached atmosphere when we moved close to him and then created the dizzy unpleasant atmosphere as we continued to move in and out whilst circling him. In response to this Glenn began to cower and began shaking, he did not look us in the eye but instead turned his head in eh opposite direction which also showed the interaction between the two sets of characters. To develop this we added power speech and stronger expressions, we began pointing at him making our arms and hands be right up in his face and by doing this Glenn told us that he became ...read more.

Chris reacted to this closing in by himself spinning and looking at the various faces all of which used the grimacing and the teeth gritting to show the anger and hate and so he himself was bombarded by the depth to which the verbal attack was having and how much it was emphasised and made worse by the physical presence, he showed his fear by slowly crawling up into a ball as we encroached him and began pushing him about and forcing him to the floor and we decided that from an audience point of view we could only see small picture type shots through the superior bodies of his terror and he closed his eyes and held his hands over his ears to show this. We as a group were then stuck as to how a powerful end to this piece of drama could be done and so were forced to halt this particular drill. We agreed that we would continue with all of the above but that when Chris was completely surrounded and forced to the floor and our chanting was at the height of its loudness he would put one hand on his back ( as he was facing the ground at this point). This was to be used as a signal the rest of us in the group that we were to immediately stop the chanting and turn around slowly in silence and walk away leaving Chris alone in the middle upset and feeling completely worthless just as slaves would have felt hundreds of years ago when such mobs attacks took place. ...read more.