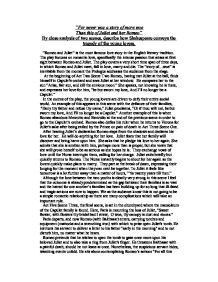 &quot;For never was a story of more woe Than this of Juliet and her Romeo&quot; By close analysis of two scenes, describe how Shakespeare conveys the tragedy of the young lovers.

"For never was a story of more woe Than this of Juliet and her Romeo" By close analysis of two scenes, describe how Shakespeare conveys the tragedy of the young lovers. "Romeo and Juliet" is the most famous love story in the English literary tradition. The play focuses on romantic love, specifically the intense passion that arises at first sight between Romeo and Juliet. The play covers a very short time span of three days, in which Romeo and Juliet meet, fall in love, marry and die. The "story of...woe" is inevitable from the moment the Prologue addresses the audience from the stage. At the beginning of Act Two Scene Two Romeo, having met Juliet at the ball, finds himself in Capulet's orchard and sees Juliet at her window. He compares her to the sun "Arise, fair sun, and kill the envious moon." She speaks, not knowing he is there, and expresses her love for him, "be but sworn my love, And I'll no longer be a Capulet." In the course of the play, the young lovers are driven to defy their entire social world. An example of this appears in this scene with the defiance of their families, "Deny thy father and refuse thy name," Juliet proclaims, "Or if thou wilt not, be but sworn my love, And I'll no longer be a Capulet." ...read more.

From his hiding place, Paris recognises Romeo as the man who murdered Tybalt, and thus as the man who indirectly murdered Juliet, since it is her grief for her cousin that is supposed to have killed her. As Romeo has been exiled from the city on penalty of death, Paris thinks that Romeo must hate the Capulets so much that he has returned to the tomb to do some dishonour to the corpse of either Tybalt or Juliet. In a rage, Paris accosts Romeo. Romeo pleads with him to leave, but Paris refuses. They draw their swords and fight. Paris's page runs off to get the civil watch. Romeo kills Paris. As he dies, Paris asks to be laid near Juliet in the tomb and Romeo consents. Seeking mercy, Paris asks that he be placed next to body of Juliet before dying: "Open the tomb, lay me with Juliet." Romeo will grant his wife's would be husband this last request, saying, "In faith, I will." Romeo descends into the tomb carrying Paris' body. He finds Juliet lying peacefully, and wonders how she can still look so beautiful-as if she were not dead at all. Romeo speaks to Juliet of his intention to spend an eternity with her, describing himself as shaking "the yoke of inauspicious stars From this world-wearied flesh." ...read more.

Capulet and Montague clasp hands and agree to put their vendetta behind them. Montague says that he will build a golden statue of Juliet, and Capulet insists that he will raise Romeo's likeness in gold beside hers. The Prince takes the group away to discuss these events, pronouncing that there has never been "a story of more woe Than this of Juliet and her Romeo." We sense the grand irony that in death Romeo and Juliet have created the world that would have allowed their love to live. That irony does exist, and it is tragic. But because of the power and beauty of their love, it is hard to see Romeo and Juliet's death as a simple tragedy. Romeo and Juliet's deaths are tragic, but this tragedy was fated: by the stars, by the violent world in which they live, by the play, and by their very natures. We, as an audience, want this death, this tragedy. At the play's end, we do not feel sad for the loss of life as much as we feel wrenched by the incredible act of love that Romeo and Juliet have committed as monuments to each other and their love. Romeo and Juliet have been immortalised as the epitome of true love not because their tragic deaths bury their parents' strife, but rather because they are willing to sacrifice everything, including themselves, for their love. ...read more.