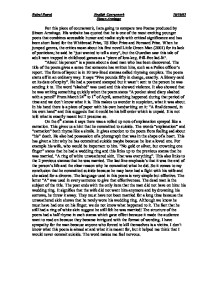 For this piece of coursework, I am going to compare two Poems produced by Simon Armitage.

For this piece of coursework, I am going to compare two Poems produced by Simon Armitage. His website has quoted that he is one of the most exciting younger poets that combines accessible humor and realist style with critical significance and has been short listed for the Whitbread Prize, TS Eliot Prize and Forward Prize. When he jumped genres, the critics moan about his first novel Little Green Man (2001) for its lack of poeticism; he said he "just wanted to tell a story", but the Guardian saw this tale of adult men trapped in childhood games as a "piece of low-key, frill-free lad-lit". "About his person" is a poem about a dead man who has been discovered. The title of the poem gives a sense that someone has written him, such as a Police officer's report. The form of layout is in 10 two-lined stanzas called rhyming couplets. The poem starts off in an ordinary way. It says "Five pounds fifty in change, exactly. A library card on its date of expiry". He had a postcard stamped but it wasn't sent to the person he was sending it to. ...read more.

The dead man is the subject of the title. The poet ends with the only item that the man did not have on him: his wedding ring. It signifies that the wife did not want him anymore and by drowning his sorrows, he threw it away. They must have not been married for a long time because the unweathered skin shows that he rarely wore his wedding ring. Although we know he must have had one on his finger, we do not know what happened to it. The fact that he still had a ring of white skin suggest he still felt he was married! The structure of the poem had a half rhyme in each stanza which gave effect because it made the audience want to read on because they became intrigued with the format of wording. I have sympathy for the man because anyone who forced to kill themselves is a victim. I don't know what this poem is aimed at and what it is meant for, but it helped me think that I would never commit suicide. The word makes me feel nervous. The second poem I am going to talk about is "Poem" and this is about an anonymous man's life and it gives details about what he did. ...read more.

There are slang words used in the poem such as slippered, blubbered and quid. The reason for this is because they are trying to use words spoken in everyday language. The impression created showed that then man is not very intelligent by the English spoken. We do not have any information about this man, he is anonymous. It gives us an effect of being interested all about his life. There is a rhyming scheme in this poem and maybe it emphasis's how predictable this mans life was. The tone of the poem made it even. If the man did one bad thing it counted for all the goods because it gave that feeling of regret every time he done a bad mistake. The reason why I have chosen the poems "About his person" and "Poem" is because they both involve discussing about somebody's life. They both have comparison in which they both rhyme in every stanza, the same words used at the beginning of every verse and the most important is it shows that nobody is perfect in society today. Armitage made the ordinary seem extraordinary by using such efficient language which made both poems enjoyable to read a second time. The structure of his poem very simple but this helped make it fascinating. Balraj Basrai English Coursework 10/10/02 Simon Armitage ...read more.