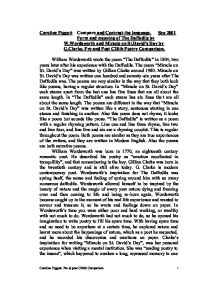 Form and meaning of The Daffodils by W.Wordsworth and Miracle on St.David&amp;#146;s Day by G.Clarke. Pre and Post C20th Poetry Comparison.

Caroline Piggott Compare and Contrast the language, Sep 2001 Form and meaning of The Daffodils by W.Wordsworth and Miracle on St.David's Day by G.Clarke. Pre and Post C20th Poetry Comparison. William Wordsworth wrote the poem "The Daffodils" in 1804, two years later after his experience with the Daffodils. The poem "Miracle on St. David's Day" was written by Gillian Clarke around 1980. Miracle on St. David's Day was written one hundred and seventy-six years after The Daffodils was. The poems are very similar in the way that they both look like poems, having a regular structure. In "Miracle on St. David's Day" each stanza apart from the last one has five lines that are all about the same length. In "The Daffodils" each stanza has six lines that are all about the same length. The poems are different in the way that "Miracle on St. David's Day" was written like a story, sentences starting in one stanza and finishing in another. Also this poem does not rhyme, it looks like a poem but sounds like prose. "The Daffodils" is written as a poem with a regular rhyming pattern. Line one and line three rhyme, line two and line four, and line five and six are a rhyming couplet. This is regular throughout the poem. Both poems are similar as they are true experiences of the writers, and they are written in Modern English. Also the poems are both narrative poems. William Wordsworth was born in 1770, an eighteenth century romantic poet. He described his poetry as "emotion recollected in tranquillity", and that remembering is the key. Gillian Clarke was born in the twentieth century and is still alive today. G. Clarke is modern contemporary poet. Wordsworth's inspiration for The Daffodils was spring itself, the sense and feeling of spring around him with so many numerous daffodils. Wordsworth allowed himself to be inspired by the beauty of nature and the magic of every year nature dying and freezing over and then coming to life and being re-born again. ...read more.

"They stretched in never-ending line". This conveys an infinite number, enthralling the reader. Wordsworth then gives elevated imagery, "stars that shine and twinkle on the Milky Way." This gives the imagery of the daffodils releasing a ray of golden light around them, giving a magical feel. Wordsworth then makes a personification, "Tossing their heads in sprightly dance". Only something that is alive could dance or toss their heads, so he points out the amount of life in these daffodils. He makes them full of life with vivid movement, "sprightly". This is a lovely word to describe the behaviour of the daffodils, and conveys that they are full of movement and spring. The mood is warm, relaxed and light with a romantic atmosphere. In stanza three an image of the whole of Nature alive is presented to the reader, "the waves beside them danced". This is the waves of the lake beside the daffodils, leaping about driven by the wind as if dancing to compete with the beauty of the daffodils. This is also a personification of the waves dancing. The mood then changes by the word "but", making the reader expect something. After all the describing of the magical and romantic atmosphere, the reader feels pessimistic that something is going to change the whole mood of the poem. The reader then discovers that nothing terrible happens but the "but" was only to shame the waves, as the daffodils were more effective than the waves "out-did the sparkling waves in glee". This means that the daffodils bettered the waves. The atmosphere is now light and fantastic again, "glee" meaning merriment and cheerfulness. There is a colon in the middle of stanza three indicating a pause, which continues with Wordsworth commenting on his feelings and actions at the present moment. "I gazed- and gazed- but little thought". The hyphens slow the line down by breaking it up gradually, this gives the impression of thought to the reader. ...read more.

I had not heard of either of the two poems before, although "The Daffodils" by William Wordsworth is quite a well-known poem. Both poems being new to me they were fresh and interesting. Studying these poems has taught me to appreciate the wonder of nature more and recognise the power of memory. I cannot say which poem I prefer as they are entirely different, but I probably enjoyed reading "The Daffodils" more, because it was light and dreamy with a bouncy rhythm to it. It also seemed more unrealistic which appeals to me more. My profound experience with nature happened last summer. I go out horse riding every weekend with a friend of mine in Brockenhurst. We spend the whole day exercising the horses and exploring the forest. One weekend we were walking along a track in the forest, we turned round to the right at the end of the track, into a clearing and we stopped straight away. In front of us, at the bottom of a wide decreasing slope was a herd of deer. Right at the front of the herd was a white stag. He was proud, wise, noble and valiant looking with the golden sun adoring him, giving him a halo effect. Everything seemed to be silent as if time had been stopped, we were in a moment all of our own. The sun was beating down on us from behind us, as if to illuminate the stag and his herd. We just stared at the stag and he seemed to stare back. The stag held our gazes, which seemed to last forever. He then proudly turned around and walked through the centre of the herd into the dark and shaded forest. He did not turn his head, but the rest of the herd walked behind him as if trying to match noble quality but none succeeded. I will never forget that, as I had never seen a white stag before and probably will never again. 1 1 Caroline Piggott. Pre & post C20th Comparison ...read more.