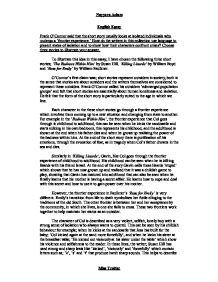 Frank O'Connor said that the short story usually looks at isolated individuals who undergo a 'frontier experience.' How do the writers in this collection use language to present states of isolation and to show how their characters confront crises?

English Essay Frank O'Connor said that the short story usually looks at isolated individuals who undergo a 'frontier experience.' How do the writers in this collection use language to present states of isolation and to show how their characters confront crises? Choose three stories to illustrate your answer. To illustrate this idea in this essay, I have chosen the following three short stories; 'The Badness Within Him' by Susan Hill, 'Killing Lizards' by William Boyd and 'Rose for Emily' by William Faulkner. O'Connor's first claim was; short stories represent outsiders in society, both in the sense that stories are about outsiders and the writers themselves are considered to represent these outsiders. Frank O'Connor called his outsiders 'submerged population groups' and felt that short stories are essentially about human loneliness and isolation. He felt that the form of the short story is particularly suited to the age in which we live. Each character in the these short stories go through a frontier experience which involves them coming up to a new situation and changing from state to another. For example in the 'Badness Within Him', the frontier experience that Col goes through is childhood to adulthood, this can be seen when he kicks ...read more.

These sentences; 'he's been a marvel' and 'they're so close now' shows Gavin thoughts, illustrating that he desperately want to seek his mother's love and attention without any interference from his father or his sister. His jealousy can be seen when his mother and sister go shopping together and he senses that his mother spends more time with Amanda, then she does with Gavin. This shows that Gavin experiences unconscious conflict with his father and his sister over his love for his mother. The relationship between Gavin and his mother can be approached through the Freudian theory based on the Ancient Greek myth of Oedipus which explains how boys such as Gavin feel when they are growing up; a certain attachment is formed between the boy and the mother which is clearly seen in this part of the story. However, Col's dream is slightly different to Gavin's. Col wishes for a storm that would break the pattern of the long hot summer days. On page 10 he states 'he does not want the past, he wants the future', this illustrates to the reader that he wishes for a change, he wants to quarrel rather than seeing his family enjoying themselves by 'building sandcastles', 'reading books' and 'wearing hats'. ...read more.

This idea of s****l feelings that Gavin has, relate to the Oedipus theory of how boys develop s****l feelings and start to notice every detail about their mothers appearance and looks as they grow up. Writers have used quite a lot of similes such as ' badness was living and growing like a cancer' to help describe the images better and making them clearer by comparing them to other living things or objects. Each simile is designed to create a specific effect, so for this example, the cancer represents a disease which cannot be controlled and is contagious. Short sentences such as 'the sea was still as glass', 'Col saw his father drowning' are used to create shock and terror by the writer. Short sentences help to increase the pace and emphasis the moment of realisation and panic. Long sentences would not be able to create this effect, which is why writers use short sentences to present how the characters confront crises. I have found that in these short stories, writers have used language cleverly in different ways to present states of isolation and to show their characters confronting crises when they undergo a frontier experience. Written By Nayyera Aslam Nayyera Aslam Miss Trotter ...read more.