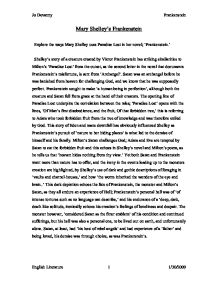 Mary Shelley's Frankenstein Explore the ways Mary Shelley uses Paradise Lost in her novel; 'Frankenstein.' Shelley's story of a creature created by Victor Frankenstein has striking similarities to Milton's 'Paradise Lost' from the outset, as the second letter in the novel that documents Frankenstein's misfortune, is sent from 'Archangel'. Satan was an archangel before he was banished from heaven for challenging God, and we know that he was supposedly perfect. Frankenstein sought to make 'a human being in perfection', although both the creature and Satan fell from grace at the hand of their creators. The opening line of Paradise Lost underpins the correlation between the tales; 'Paradise Lost' opens with the lines, 'Of Man's first disobedience, and the fruit, Of that forbidden tree,' this is referring to Adam who took forbidden fruit from the tree of knowledge and was therefore exiled by God. This story of Eden and mans downfall has obviously influenced Shelley as Frankenstein's pursuit of 'nature to her hiding places' is what led to the demise of himself and his family. ...read more.

It is Satan and the monster who initially invoke the readers compassion, as the monster seems of a benevolent nature as he watched the 'beloved' De Lacy family and took 'pleasure' in aiding their labours. He also shows altruistic behaviour in saving a drowning girl, and lighting a fire to warm his creator, making him possibly more sympathetic than Frankenstein, who forgot his family in his aspirations to 'become greater than his nature will allow.' The monster states, after reading Paradise Lost and other literature he has found after eating the metaphorical apple, that 'sorrow only increased with knowledge', as he became aware from the De Lacey's, of such things as love and acceptance that he came to long for. His good intent could also be interpreted on his hearing Saphie play music that he found 'so entrancingly beautiful that they at once drew tears of sorrow and of delight from my eyes.' Satan's ruin also came from his pursuit of knowledge, leading both 'men' to their exile from the people they sought acceptance from. ...read more.

As the monster lives in a hut, we are reminded that he doesn't only live outside physically, but emotionally as he is a mere voyeur of family life while watching the De Lacys, and this social exclusion is to blame for his murderous behaviour, again relating to Satan who was excluded my his creator. We could again relate this to Satan who is looking for earth and is also 'racked with deep despair,' as are Shelley's characters. Frankenstein also resembles God, as he created his own version of Adam, and the monster that he constantly refers to as 'fiend' and 'devil' reminds him; 'You, my creator, abhor me..' his plea resounds through the humanity of every reader who has ever felt alone or incomplete, but these feelings however are to be changed as the monster commits heinous crimes against the humanity he once 'longed for,' and on his final rejection he cries; 'oh, earth...the mildness of my nature had fled, and all within me was turned to bitterness and gall.' This is when the role of God is transferred from Frankenstein and to the monster who will now decide his fate. ?? ?? ?? ?? Jo Devanny Frankenstein English Literature 1 1/30/2009 ...read more.