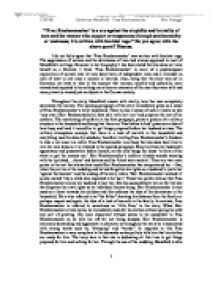 &quot;'Frau Brechenmacher' is a cry against the stupidity and brutality of men and the women who support arrangements through sentimentality or weakness; it is written with feminist rage.&quot; Do you agree with the above quote? Discuss.

"'Frau Brechenmacher' is a cry against the stupidity and brutality of men and the women who support arrangements through sentimentality or weakness; it is written with feminist rage." Do you agree with the above quote? Discuss. I do not fully agree that 'Frau Brechenmacher' was written with feminist rage. The suppression of woman and the dominance of men had always appeared in most of Mansfield's writings. However in her biography it has been stated that she does not view herself as a feminist. I think 'Frau Brechenmacher' is more of a psychological exploration of women who let men deny them of independent roles and a reminder as well of what is lost once a woman is married. Also, being that the story was set in Germany, we have to take in the account that women, socially and culturally, were viewed and expected to be nothing more then an extension of the men they were with and were primarily viewed just as objects in the German society. Throughout the story, Mansfield reveals with clarity, how the men completely dominates the women. The opening paragraph of the story immediately gives us a sense of Frau Brechenmacher's strict household. There is also a sense of rush or hectic as she 'runs over [Herr Brechenmacher's] best shirt with hot iron' and prepares the rest of his uniform. ...read more.

His male chauvinist attitude seems to be acceptable to Frau Brechenmacher as he tells her off for not being dressed. Herr Brechenmacher is extremely demanding and aggressive in character as throughout the story he is associated with strong words such as, "stamping" and "strode." In response to this Frau Brechenmacher is very compliant to his demands as she politely tells him that his clothes are ready for him. The irony here is that she is dedicating all this time to get things prepared for him and nothing for her. Through the use of the wedding, Mansfield is able to show us of what is lost once a woman is married. The bride is associated with the image of 'an iced cake all ready to be cut and served in neat little pieces to the bridegroom beside her.' This tells us that the bride will be dominated by the groom and that her sense of individuality will be eaten up by the groom as like a cake, she is created to be consumed. This as well reinforces the idea of sacrifice and that is it is the bride that has to please the groom and not the other way round. Frau Brechenmacher is as well physically dominated as it is later revealed in the ending of the struggle between her and Her Brechenmacher. ...read more.

The wedding had reminded her of her own, of her own wedding day. Of the day she had to give up her rights and had to be bounded to someone else. What makes me partially agree with the above quote is that we are shown a side of the German society. In the story we are given a glimpse of individuality through Theresa, the bride. The reason to why she agreed to marry the groom was because the priest had made her. Germany at the time must've been a highly conservative place and so must have upheld conservative values where they believed the men had every right to dominate their wife. As well, the story is from one perspective. It is of a woman, having a glimpse of her past that sees herself being bullied as Theresa was being bullied. However this was acceptable as the view was 'every wife has her cross'. However, it is evident that the women in the story do submit to the men and do nothing about it, as even their mothers would surrender their own daughter to a man with the knowledge that their daughter will be mistreated. ?? ?? ?? ?? Ida Patera English Literature Jerudong International School 12SFHS Katherine Mansfield - Frau Brechenmacher Mrs. Krueger 1 ...read more.