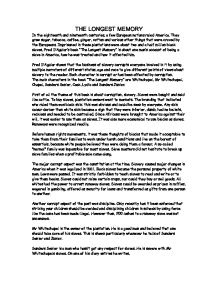 THE LONGEST MEMORY In the eighteenth and nineteenth centuries, a few European nations ruled America. They grew sugar, tobacco, coffee, ginger, cotton and various other things that were craved by the Europeans. Imprisoned in these plantations were about two and a half million black slaves. Fred D'Aguiar's book "The Longest Memory" is about one man's account of being a slave in America, how he was treated and how it affected him. Fred D'Aguiar shows that the business of slavery corrupts everyone involved in it by using multiple narrators of different status, age and race to give different points of views about slavery to the reader. Each character is corrupt or has been affected by corruption. The main characters in the book "The Longest Memory" are Whitechapel, Mr Whitechapel, Chapel, Sanders Senior, Cook, Lydia and Sanders Junior. First of all the theme of this book is about corruption, slavery. Slaves were bought and sold like cattle. To buy slaves, plantation owners went to markets. The branding that indicated who ruled them was black skin; this was obvious and could be seen by everyone. ...read more.

He is severe with Mr Whitechapels slaves. On one of his diary entries he writes, 'Rations of slaves to be increased along with one extra break in the afternoon following an inspection by the master of the Whitechapel plantation. c**k-a-doodle-doo. He said they looked thin. What good is a fat slave to anyone but himself? Mr Whitechapel you are wrong, Sir. Cattle need fattening, not slaves.' P38 This not only further shows that Mr Whitechapel is a kind and gentle caring person but Sanders Senior in an evil narrow-minded man. Sanders does, however, have a soft side to him which is expressed earlier on in his diary. Whitechapel made a fascinating knot with leather which pulled untangled. He is by far the best worker, and he has the most agreeable manner. He also knows what it is like to lose a wife. P37 Whitechapel is the eldest black slave on the plantation. His name 'Whitechapel' is common of the slaver era as it was a custom to names your slaves after you. He is trusted and has not done anything bad. He shows love for his family and is spoken about in Sanders Senior's diary to always have a smile on his face. ...read more.

To continue his education, she sees him and recites verses of Shakespeare that she has memorised. Despite not being allowed to read and write, corruption of a kind was going on because blacks were doing so. Lydia also expresses love for Chapel that is very much frowned upon and occurs in the north of the country. An excerpt from The Virginian (The slavery guide) shows the thoughts of the South about the North. 'Miss L. wrote in and called my thinking on last week's issue concerning the perfidy of liaisons between white women (they are not ladies) and black men unconstitutional. Miss L. is a previous correspondent who has brought reason to this column in the past. I credited her at time with intelligence. I see now I was grossly mistaken. She exhibits love for blacks that clouds her ability to reason about the subject involving them. Her thinking puts her in that bracket of females who end up in the North walking arm in arm down Dignity Street with a black man'. P121 Lydia and Chapel make plans to run away and meet in North America where they can live a happy life together because they knew that the system of slavery was wrong amd wanted to do something about it. By Todd Kitchen 11L3 ...read more.