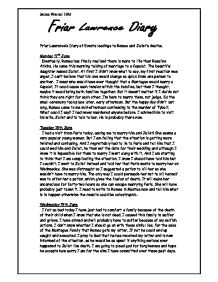 Friar Lawrence's Diary of Events leadings to Romeo and Juliet's deaths. Monday 17th June Eventually, Romeo has finally realised there is more to life than Rosaline Atkins. He came this morning talking of marriage to a Capulet. The beautiful daughter named Juliet. At first I didn't know what to say, my first reaction was anger, I can't believe that his love would change so quick from one person to another. I mean who would have ever thought that a Montague would marry a Capulet. It could cause such tension within the families, but then I thought, maybe it would bring both families together. But it doesn't matter if I do/do not think they are right for each other. I'm here to marry them, not judge. So the small ceremony took place later, early afternoon. ...read more.

She was distraught so I suggested a potion to kill her so she wouldn't have to marry him. The only way I could persuade her not to kill herself was to offer her a potion, which gives the illusion of death. It will make her unconscious for forty-two hours so she can escape marrying Paris. She will have probably just taken it. I need to write to Romeo in Mantua now and tell him what is to happen otherwise the results could be catastrophic. Wednesday 19th June I felt so bad today I have just had to comfort a family because of the death of their child when I know that she is not dead. I caused this family to suffer and grieve; I have sinned and will probably have to suffer because of my selfish actions. ...read more.

I hope I do not come to late. My worst nightmare has come true, I have jus returned from the tomb. When I was there I found Romeo leaning over Juliet's body dead. Then I saw Juliet move, I ran over and pleaded her to come with me, pulling her away from Romeo, but then she noticed he was dead and started screaming and crying I didn't know what to do as I knew the guards would hear her eventually. So knowing that she wouldn't leave Romeo I ran and left her there. Now I have jus heard that she has killed herself. Why did I run? I could have stopped her. I wish lord that I had not got so involved. My selfish actions of trying to bring those two families together ended in the death of their youngest child. I shall never forgive myself for the pain I have caused. I hope the lord will forgive me. James Warner 10M ...read more.